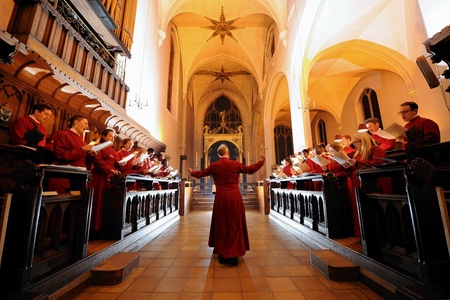 Music students from the University of Aberdeen will play a leading role in a celebration of Gaelic music and language taking place in Aberdeen this weekend.

On Saturday (June 24), the St Andrew's Cathedral choirs and Diocese of Aberdeen and Orkney will perform a mass entirely in Gaelic at St Andrews Cathedral.

The annual event, which is now in its third year, is held to honour Saint Moluag, an Irish bishop who founded the Diocese of Aberdeen in 566 AD.  It is considered to be one of the north-east’s most important Gaelic language events.

Sarah, who is one of several American composers currently studying music composition at PhD level with Professor Paul Mealor and Dr Phillip Cooke, composed her new work specifically for the occasion.

She said: “The St Andrews Mass features two choirs - a full choir which sings the mass text in the traditional Latin, and a semichorus of soloists which sing in Gaelic.

“This brings together these diverse segments of Aberdeen and Scotland’s religious and musical heritage in one unique composition.

“This composition is a large work of mine that forms the bulk of the first half of my PhD, and I’m really looking forward to hearing it performed for the first time.”

The Gaelic Eucharist will be performed at St Andrew’s Cathedral on King Street at 3:30 pm on Saturday, 24 June, and members of the public are welcome.  The Eucharist will be celebrated by Very Rev Dr A Emsley Nimmo, Dean of Aberdeen & Orkney, and a bilingual order of service will be provided so that all may participate.

Ms Rimkus is an American composer in her third year of study in Aberdeen.  Her work frequently derives influence from both American and Scottish musical traditions, and their abundant common ground.

The performance of the St Andrews Mass maintains the strong connection between St Andrew’s Cathedral and its American history.

In 2014 the Cathedral commissioned Royal composer and Aberdeen University professor Paul Mealor to compose the Seabury Mass, which honours Bishop Samuel Seabury of Connecticut, the first consecrated bishop of the Anglican Communion outside the British Isles, consecrated in Aberdeen on 14 November 1784.