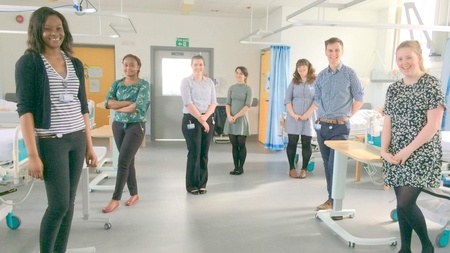 A new breed of clinician is having a "considerable" impact on patient care and helping to ease workloads for doctors across the north east, according to health bosses.

NHS Grampian said that the number of Physician Associates - who perform many of the tasks traditionally fulfilled by doctors -  has grown to 18 since the role was first introduced in 2013.

The health board also said it hoped to greatly increase that number over the next few years and announced plans to offer new Physician Associates graduates guaranteed employment as part of an ambitious recruitment campaign.

The move is the latest development in an innovative partnership with the University of Aberdeen, which was the first in the country to pilot the MSc in Physician Associate Studies in 2013 and comes ahead of the latest open day on Monday for the courses 6th intake.

Dr Annie Ingram, Director of Workforce at NHS Grampian, confirmed the health board were also working with the University to explore bursary options for applicants interested in joining this year’s courses.

“The role of Physician Associate really has gone from strength to strength here over the last few years,” she said.

“It is clear they are now having a considerable impact and playing a vital role in a number of areas across Grampian. Our workforce can’t afford to stand still and we need to continue to evolve to meet increasing demands and provide the skills we need across a range of disciplines.

“While PAs are not doctors, they are able to do many of the things junior doctors can. They work under the direct supervision of a named doctor and are trained to take medical histories, perform examinations, diagnose some illnesses, analyse test results and help develop care management plans.

“That assistance helps ease workloads and allows doctors to focus their attention where it is needed most.”

Physician Associates have been working in general practice and in Aberdeen Royal Infirmary in general surgery, orthopaedics, emergency medicine and respiratory medicine since September 2013.

We are proud to be the only university in Scotland currently offering the MSc in Physician Associate Studies and it is clear that the programme is already having a positive impact on the frontline of medical care. " Professor Steve Heys

Dr Richard Coleman, Associate Medical Director at NHS Grampian, said:   “The feedback from patients who have been treated by PA’s has been really positive but unfortunately there still isn’t widespread awareness of the role. We know there is still work to do to raise awareness of just how highly trained, competent and valuable they are as medical professionals.

“The role has huge potential and we’ve really only just begun to scratch the surface. We need to do everything we can to develop this role which is why we are so pleased to be working so closely with Aberdeen University to make these opportunities available.

“Since we employed our first Physician Associates in 2013, the role has continued to gather momentum throughout the country and there are now a number of health boards utilising the role and between 250 and 500 working in the UK.

“We are proud to be at the forefront of developing this new clinical profession and hopefully the guarantee of employment upon completion of the University of Aberdeen course - as well the student bursaries in exchange for a 2-year commitment to working in Grampian - will prove attractive.”

Professor Steve Heys, a breast cancer surgeon and Head of the University of Aberdeen’s School of Medicine, Medical Sciences and Nutrition, said: “We are proud to be the only university in Scotland currently offering the MSc in Physician Associate Studies and it is clear that the programme is already having a positive impact on the frontline of medical care.

“We are finding that the role of Physician Associate is appealing to a wider range of people, some who perhaps would never have previously thought about a career in medicine, and this adds to the teams who deliver healthcare to our patients.”

Lauren Homer, who is now a PA with NHS Grampian after graduating from Aberdeen University, said: “After you sit the national exam you have an intern year at NHS Grampian - I did 6 months in A&E and six months in General Surgery. After that I became a permanent member of staff in the Emergency Department and have worked there ever since.

“I get to undertake many roles in A&E. Really, I start seeing patients from the second they come through the door, take handovers from the paramedics, assess patients, decide on investigations they need within our department, as well as refer to other specialties. We can also perform resuscitation and deal with all manner of minor injuries. Hopefully the role will continue to develop in the future too.”

The MSc in Physician Associate Studies is a two-year training course for students who already have a science undergraduate degree, and is then followed by a one-year internship.

The deadline for applicants for the 2017 intake is May 1, 2017 and interviews will be held in early June.