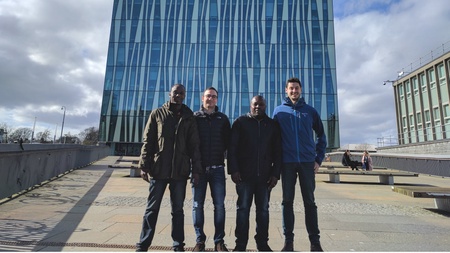 Dr Davide Oppo and Dr Vittorio Maselli from the University’s School of Geosciences have been delivering BSc and MSc courses at UDSM as part of a project funded by Shell [1] that aims to promote learning, research and knowledge-growth.

The School was selected by BG Group (which was acquired by Royal Dutch Shell plc in 2016) for the initiative based on its success in working with international partnerships in Brunei, Brazil and Ghana.

Davide and Vittorio were specifically hired to build local content by developing research collaborations with Tanzanian partners and to teach key courses.  All of their academic duties take place at UDSM, where they spend approximately five months of the year.

Rather than being classed as visiting lectures, the pair have been fully integrated into the academic team at UDSM. This unique approach, which aims to foster mutual trust and respect, is already paying dividends, as Davide explains:

“Our time at UDSM has been really positive, and we have been really impressed by what we have seen.

“The staff are eager to develop their teaching and research programs and are open to our suggestions of how to plan and organise their taught courses and research activity, and on developing collaborations with industry.

“The students are equally motivated and keen for new learning opportunities, and we have organised a number of field trips which have helped develop new projects and expand the research capabilities of UDSM’s Geology Department.

We believe that this project puts us a step ahead of the game, and leaves us well placed to open doors to new collaborations within Tanzania and elsewhere" Professor Andrew Hurst

They say that exposure to a different approach to teaching and research, as well as to collaborations in what they describe as a “geologically intriguing territory” is helping to improve them as geologists.

Vittorio added: “Our aim through this project is to make a contribution to the development of UDSM’s Geology programmes, as well as to open up new research partnerships and strengthen existing collaborations.

“Over and above this, we hope to play our part in developing Tanzania’s oil and gas sector for the benefit of current and future students, as well as for the country as a whole.”

“By raising the profile of Geology, other academic disciplines at UDSM are exploring similar transnational opportunities, which is a testament to the success of this project.

“Internationalisation is a key part of the University of Aberdeen’s strategy, and the work that Davide and Vittorio have undertaken is testament to the University’s commitment towards helping Tanzania develop a sustainable oil and gas sector that will benefit the country and its people.

“It also demonstrates that  companies, in this case Shell, are willing to directly invest in innovative academic programmes in order to support the development of local content in specific locations.

“We believe that this project puts us a step ahead of the game, and leaves us well placed to open doors to new collaborations within Tanzania and elsewhere.”

[1]The companies in which Royal Dutch Shell plc directly and indirectly owns investments are separate entities. In this press release the expression “Shell” is sometimes used for convenience where references are made to those entities individually or collectively.