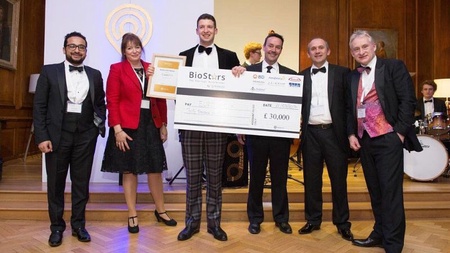 A University of Aberdeen student who started his own 'socially conscious' biotechnology firm whilst training to become a doctor has won £30,000 to support the development of his company.

James McIlroy who is studying medicine at Aberdeen, won the BioStars2017 startup award for his company EnteroBiotix – set up to allow doctors to treat patients with helpful bacteria.

The immediate aim of EnteroBiotix is to allow patients with a C. diff infection in the gut to receive a highly effective, but currently difficult to access, treatment through the NHS.

BioStars is a life and health sciences body designed to enable bio-entrepreneurs turn their scientific ideas into marketable products.

James picked up the top prize after pitching against 15 other companies at the competition finals at University of Oxford on Tuesday March 21.

The prize includes £30,000 to get the concept off the ground, access to laboratory and office space as well as ongoing scientific, business development and legal support from established professionals.

The competition was very tough, and I believe that we won the top prize because of the strength of our offering and the progress of our team to date. " James McIlroy

C. diff (Clostridium difficile) infections affects around 15,000 people in the UK every year. Antibiotic treatment is often relatively unsuccessful, however around 25-30% of patients suffer from recurrent infections.

James McIlroy, CEO of EnteroBiotix said: "My team and I are delighted with this strong support and recognition from Biostars. The competition was very tough, and I believe that we won the top prize because of the strength of our offering and the progress of our team to date. We have several products in various stages of development, all of which will provide significant benefits to patients as well as economic benefits to the NHS."

EnteroBiotix aims to allow people to receive this procedure more easily through the NHS by creating a standardised, off the shelf microbial product that doctors can use in the procedure.

Earlier last year James won £40,000 at the Scottish Edge competition, and was recently nominated as one of Scotland’s ‘Ten Outstanding Young Persons’ by Junior Chamber International.