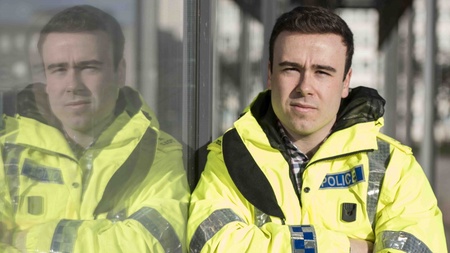 A University of Aberdeen medical student has been praised by fire and police services for rushing to the aid of victims of a car crash.

Joshua Michie, who is also a volunteer Special Constable with Police Scotland, helped provide assistance to a man trapped in the wreckage of a car whilst they waited for emergency services to arrive.

With his medical and police training, he was also able to advise fire services on how the patient needed to be removed from the vehicle, and pass on vital information to paramedics when they arrived.

Joshua’s help was officially recognised by the fire brigade involved in the rescue that wrote a letter to Joshua’s Inspector at Police Scotland praising his “prompt actions”.

The accident happened as Joshua was heading back home to his family home in Morpeth, Northumberland, for the Christmas break.

After coming across a long traffic jam in Morpeth town centre, he decided to investigate the cause and came across a two car accident that had happened just moments before he arrived.

Once he had confirmed the family travelling in the first car was okay, Joshua ran to the aid of the driver of the other car which had spun off from the original collision and smashed into a number of other parked vehicles.

Grabbing his Police ‘high-vis’ jacket from his boot for his own safety, Joshua quickly found himself in charge of the situation.

“The driver of the second car was clearly badly hurt. The impact was so great, his car was practically hidden within the parked cars he’d smashed into,” explains Joshua.

“I got into the back seat of the car and reassured him that help was on the way. He was conscious but really confused and disorientated.”

Joshua is an absolute credit to the Medical Profession and a great example, in my professional experience, of the good doctors we have in the North East." Inspector Darren Bruce, Police Scotland

Joshua instructed another bystander to fetch the First Aid kit from his car and he instructed someone else to support the driver’s neck allowing Joshua to liaise with fire crews who had just arrived.

He added: “The paramedics had yet to arrive and fire crews were a bit confused as to who I was, and why I was involved in the situation with the casualty. I explained what had happened and told them that in my opinion, which I stressed was that of a medical student – not a doctor, was that they would need to cut the roof off the car to safely remove the driver.

“My assessment was useful for the fire services so they could start making preparations with the equipment and I was quite pleased to hear that the paramedics agreed with my assessment that the roof needed to come off once they’d arrived.”

The driver was cut free and taken to hospital for treatment.

Afterwards, Joshua even found himself helping gather together the motorists who had been struck by the vehicles that had crashed so they could exchange insurance details.

“The whole thing was over pretty quickly. I wasn’t trying to be a hero or anything, I just realised quickly that there were no emergency services in attendance, and I thought with my medical and police training I would at least be able to lend a hand until help arrived.”

Northumberland Fire and Rescue wrote to Joshua’s Inspector at Police Scotland to pass on a commendation of good work, stating that his prompt actions on updating the fire services allowed for a ‘swift removal of the casualty’.

In passing the information on to the University, Inspector Darren Bruce from Joshua’s police unit added: “I have been extremely impressed with the way that Joshua conducts himself. I am in no doubt that his medical training, his personal attributes and the influence from your own organisation have helped develop Joshua into an asset to both of us.

“Joshua is an absolute credit to the Medical Profession and a great example, in my professional experience, of the good doctors we have in the North East.”