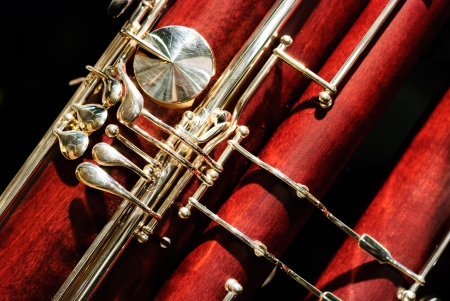 The latest release on the University of Aberdeen's record label, Vox Regis, aims to revive a 'dying instrument'.

Vox Regis, meaning Voice of the King, was launched in 2016 to showcase the breadth of talent among University musicians, singers and composers.

The first album featured The Choir of King's College, Aberdeen and the second the University’s Chamber Choir, who performed new arrangements of the work of Robert Burns.

The latest disc is dedicated to Scottish bassoon music – an instrument said to be dying out as it is recognised by just ‘one percent of people in the street’.

Professor David Smith, master of chapel and ceremonial music at the University of Aberdeen, said Scotland had a wonderful tradition in bassoon music and that the record label provided an opportunity to demonstrate the diversity of musical styles promoted within the University.

It will be launched at a free concert at King’s College Chapel on Monday March 6 as part of Aberdeen’s sound festival where children will be offered an opportunity to try out the bassoon or a smaller-sized version of the instrument, known as a tenaroon.

“We are delighted to combine the release of the latest Vox Regis album with the sound festival. It is very fitting as for the next five years sound will focus on ‘endangered instruments’ and the bassoon very much falls into this category, so much so that in 2015 a campaign called Save the Bassoon began which aims to remind the public of the importance of this engaging member of the woodwind section and to encourage young musicians to take it up.”

The disc, titled A Much-Travel’d Clown, features Lesley Wilson Principal bassoonist of the Scottish National Orchestra for 27 years. Lesley now works mainly in the North East, teaching in city schools including the Aberdeen City Music School and the University of Aberdeen.

On being asked to give concert recitals for radio broadcast in the 60s, Lesley came to realise that the bassoon had a relatively limited recital repertoire compared with other instruments and, often overlooked by composers, was underrepresented in terms of contemporary music.

Since then, Lesley has sought to rectify this and has been on the lookout for contemporary composers willing to explore the expressive potential of the instrument she loves. Some of the works she has come across or personally commissioned are featured on this new CD recording.

The free concert will begin at 6pm with a workshop for young people at 6.30pm. Booking is not required. For more details visit http://sound-scotland.co.uk/event/event-cd-launch-a-much-traveld-clown

All proceeds from the sale of the CD will support research into Parkinson’s disease at the University of Aberdeen.