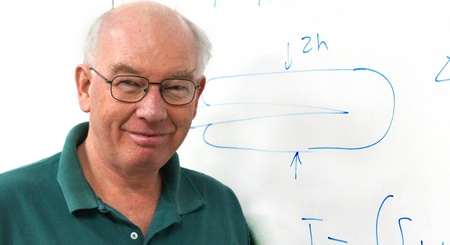 Scientists working on the development of a new material that could one day be used in the construction of anything from spacecraft to prosthetic limbs have made a major breakthrough in their research.

In a letter published in the journal Nature, scientists including Professor Robert McMeeking from the University of Aberdeen have proved that the new ‘metamaterial’ – a lightweight, solid foam known as Isomax™ – is the world’s first to achieve the performance first proved by theory over 40 years ago.

Metamaterials are engineered to have properties not found in nature, and put together using multiple elements fashioned from materials such as metals or plastics.

The majority of the research on Isomax has taken place at the University of California Santa Barbara (UCSB), where Professor McMeeking - who specialises in materials and mechanical engineering - is based for much of the year.

Working alongside materials scientists Jonathan Berger from UCSB and Haydn N.G. Wadley from the University of Virginia, Professor McMeeking provided the calculations that helped prove the potentially revolutionary qualities of Isomax in material design.

Explaining the significance of the breakthrough, he said: “In short, we have made it possible to produce a lightweight material with the highest stiffness possible by making a cellular system.

Our design provides us with a material that has the highest possible stiffness for the lowest possible weight, and for less cost than rival materials " Professor Robert McMeeking

“There are lots of applications in engineering where one wants to fill space with a low density, lightweight material that is also stiff, for example, load bearing components in aircraft, drones and spacecraft.

“Our design provides us with a material that has the highest possible stiffness for the lowest possible weight, and for less cost than rival materials which gives it a better chance of widespread use.”

Professor McMeeking said that the development of the material has been well timed - as resources become more limited and concern for energy efficiency grows, Isomax would require fewer resources to produce and less fuel to transport.

And from a personal perspective, he said that the eventual production could one day rank as the highlight of his career.

“One of the most satisfying things about this breakthrough is that the theorem telling us the stiffness of the optimal design is was proved in the 60s, but up to now no-one has produced a design that achieves this,” he said.

“We have found that optimal design and we also know that it cannot be bettered.”

More information about Isomax can be found at Nama Development, a company formed by Professor McMeeking's research colleague Jonathan Berger with the help of John Greathouse and UCSB’s Technology Management Program.