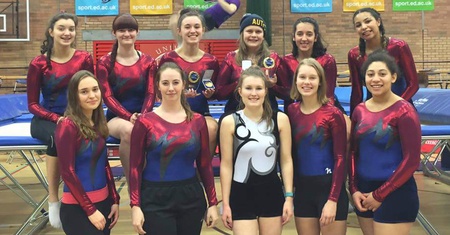 A University of Aberdeen student has a spring in her step after achieving her best ever competitive trampolining performance at the recent Scottish Student Trampoline Open (SSTO).

Kim Beattie, who is a 1st year Engineering student, was part of the 12-strong Aberdeen team that travelled to Edinburgh University for the competition, which involved hundreds of competitors from across the UK and Ireland and is second only to the BUCS Nationals in terms of importance.

As well as coming first in the ladies pro-elite category and recording the highest trampoline score of the competition, Kim won a clutch of additional awards, including two special awards for the highest difficulty score in the normal trampoline and double mini trampoline (DMT) events.

She said: “I rate my performance at this competition as the best I have ever competed in for the University, especially as I gained a new personal best in my second routine.

“As a fresher, no one really knew what I was capable of so it was nice to show a new crowd what I can do. I love challenging myself and seeing how high I can push my execution scores, and in this instance it really paid off!”

Kim’s performance follows a successful year last year, when she won the British and Scottish Ladies’ title in the DMT event.  Double mini trampolining involves a long-run up followed by high-flying stunts, and Kim was delighted to surpass her previous performances by recording a new personal best at the SSTO.

I love challenging myself and seeing how high I can push my execution scores, and in this instance it really paid off!" Kim Beattie

As a current member of the Great Britain senior DMT squad, Kim is working on qualification for a number of major competitions, including the World Championships in Bulgaria which take place in November.

In the meantime however, she will be doing all she can to help Aberdeen University Trampoline Club reach even greater heights, as well as attract new members.

“Team Aberdeen University is currently sitting fifth in the Scottish league table with one competition to go, making this one of our best seasons yet.

“It’s great to see such a small club sitting so high up the ranks, and with the strength that we have in the team at all levels I’m confident we’ll be a force to be reckoned with next season.

“We are still a small team who are trying to expand, and I would encourage anyone to come and join our amazing team, even if they have no experience of trampolining whatsoever.”