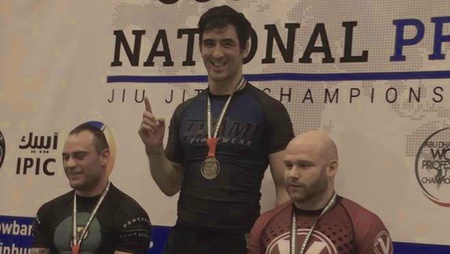 An Aberdeen medical student has won gold in the most prestigious Brazilian Jiu Jitsu championship ever held in Scotland.

Andrew Ablett, a second year medical student at the University of Aberdeen, took the top prize in his weight category at the Scotland National Pro Jiu Jitsu Championship in Edinburgh, in December.

The best competitors from across Europe travelled to Scotland to take part in the event at the Meadowbank Sports Centre which was a qualifier for the Abu Dhabi world championships.

It was a great experience, and I hope to continue competing to a high level. However, my primary focus is on my medical studies, and they must come first." Andrew Ablett

Andrew defeated both of his opponents to take the gold – winning each bout in under 60 seconds.

Andrew has been involved in martial arts since the age of 5; initially beginning with Tae Kwon Do as a consequence of his Korean mother's wishes for me to stay in touch with his heritage.

Following success in the Scottish championships and competing as part of the Scottish national team, Andrew moved on to the ‘art of the eight limbs’ – Muay Thai. He went on to train at the best gym dedicated to the art in Thailand and win a prestigious event before discovering Brazilian Jiu Jitsu, known as ‘the invisible art’.

Andrew explains his introduction to the sport was an unusual one.

“In my late teens I enjoyed travelling around martial arts gyms not only to test my skill but also to look for innovative techniques to add to my repertoire,” he explains.

“During one of my excursions I trained at gym which also taught Brazilian Jiu Jitsu. In all honesty I didn't think very highly of the martial art at the time. Consequently, the head coach at that gym asked me to spar with one of his students... but this wasn't just any of his students, this student was clinically blind. In fact his guide dog would wait patiently at the side of the training area for his master to finish training each day.

“Despite being a well versed martial artist at the time, the blind man used his calm, collected and efficient Brazilian Jiu Jitsu techniques to not only control my every movement, but he also  forced me to submit on multiple occasions with ease and little effort. Feeling more mesmerized than defeated, I immediately begun my training in Brazilian Jiu Jitsu in awe of what I had just experienced.

“BJJ differs from other martial arts in that there is a significant cerebral aspect to it. Many have compared BJJ to playing chess, but with your body; strategically moving segments of your body to gain an advantageous position in which your opponent is forced to submit.

“Unlike many other martial arts, BJJ also offers the opportunity for the smaller person to subdue the larger opponent without the need to throw a strike or even hurt them.

“Personally I find BJJ greatly calming on my mind. It forces me to face difficult situations which I don't like and calmly construct a winning solution to effectively overcome the challenge. I find this mind-set key to my success in studying medicine.

"I am hugely grateful to Arek Zienkiewicz, the head coach and owner of Immortals Gold Team, for his world class BJJ teaching. I know that I could not have achieved any of this without his direction and coaching.”

If it was not for an administrative clause, Andrew’s win in Edinburgh would have won him an all-expenses paid trip to compete at the Abu Dhabi World Pro Championships.

Unfortunately, tournament rules state that in order to claim the prize, every competitor you face must be from a different team. Andrew’s opponents were from the same team but trained at different gyms.

Despite the disappointment, Andrew says he prefers to focus on the positive aspects.

He said: “It was a great experience, and I hope to continue competing to a high level. However, my primary focus is on my medical studies, and they must come first. My dream is to become a surgeon working for Medicines Sans Frontiers (MSF).”