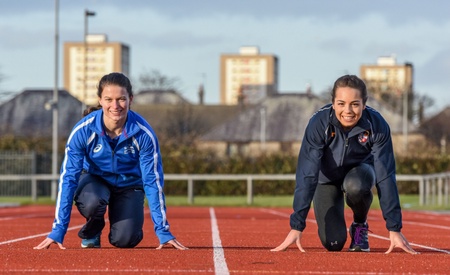 Two University of Aberdeen students with ambitions to compete in next year's Commonwealth Games have been given a boost to their hopes after being selected for the Scottish Athletics Supported Athletes' squad.

Zoey Clark and Kelsey Stewart will receive specialist coaching support from the national governing body for athletics as they aim for the 400m and 400m relay events respectively.

The athletes – both of whom are supported by University Sport – now face an intense year of training and competition as they aim for the Games in Australia’s Gold Coast.

For Kelsey, a second year Exercise and Health Science student, her selection to the squad came as a welcome surprise.

“There are so many high quality athletes in Scotland that I really didn't expect to be selected, but I feel that I’m growing as an athlete each season and I’m really pleased that Scottish Athletics see me as part of their vision,” she said.

The 19-year-old from Stonehaven holds a Sports Bursary from the University and trains at Aberdeen Sports Village.  Last year she won two silver medals at the British Universities and College Sport (BUCS) Nationals in the indoor and outdoor 800m, while also becoming Scottish Universities 400m and 400m relay Champion, breaking the record in both events.

Kelsey has a busy year of training and competition ahead, including qualifying for the European U23 championships in Poland, but the prospect of Commonwealth Games involvement will never be far from the back of her mind.

“There is still a long way to go to make it to the Games, and the most important priority for the relay team is that we run the qualifying time.

We have a great sports bursary scheme at Aberdeen, and I know if there was to be a clash with a major competition I would be supported instead of hindered" Kelsey Stewart

“Even if we achieve this, there are other factors that are out of our control, so the most important thing that I can do for now is concentrate on improving my personal bests and hope things go to plan.

“Thankfully we have a great sports bursary scheme at Aberdeen, and I know if there was to be a clash with a major competition I would be supported instead of hindered.”

Now in her fifth and final year of a Chemical Engineering Masters, 22-year-old Zoey holds a University Sports Scholarship and has trained in her home city throughout her studies.  Her selection to the Supported Athletes’ Squad means that she will be able to count on continued support when she finishes her degree.

As a final year student, Zoey’s main challenge this year is to balance her training with her studies, but she is confident on building on her sporting achievements over the past 12 months to put her in with a chance of being selected for the Commonwealth Games.

“Despite being injured for a large portion of last year, I still made significant progress in bringing my 400m times down and I’m hoping to continue that form into this year,” she said.

“There are other competitions such as the World Championships in London that I’m aiming for this year, but running the qualifying standard for the Commonwealth Games may also put me in with a chance of selection.

“It’s going to be a challenge because my course is very demanding, so I have to manage my time more effectively than ever in my final year.  Thankfully I have family and friends who are very understanding!”