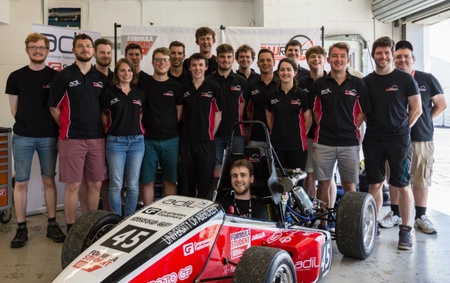 Nexen Petroleum UK has been announced as TAU Racing’s principal sponsor, marking the latest exciting stage in the development of the team.

TAU Racing finished first in Scotland and tenth in the UK in last year’s Formula Student competition, and the sponsorship deal - worth nearly £20,000 - will allow the team to aim for a higher finish when the annual international student motorsport competition is held at Silverstone this year.

The team’s presence at Subsea Expo (Stand 69) will allow team members who are interested in careers in the energy sector to exhibit the car and speak with industry professionals about potential career opportunities.

John Vevers, TAU Racing’s Technical Director, said: “Nexen's generous sponsorship has enabled the team to purchase a Triumph motorbike, which will allow engineering students to modify and tune its engine to suit our Formula Student car.

“The new partnership will allow the team to take the development of our Formula Student Race car to the next level, allowing us to pursue projects that previously would not have been possible.

“In addition to the financial support, Nexen will support team members with technical mentoring and operational advice, enhancing sustained student development. This is an exciting new chapter for the team and we look forward to continuing this joint venture with Nexen in years to come.”

Ray Riddoch, Nexen’s Managing Director U.K. & Sr. V.P. Europe said: “We are very excited about this partnership.  It reflects the importance Nexen places on inspiring the next generation of scientists, technical specialists and engineers.

“Nexen’s donation to the TAU Racing team enables the students to apply their skills to a real life engineering project and to see the results in action.  The team has seen fantastic success over the years and with Nexen’s investment, we look forward to seeing them reach even greater heights in 2017.”

Team Aberdeen University (TAU) Racing is a society of undergraduate students from various disciplines that work together to design and manufacture a single seat racing car to compete in the IMechE Formula Student Competition.

Held by the Institute of Mechanical Engineers (IMechE), the student motorsport event challenges teams from around the world to design and manufacture a single seat racing car.

The TAU Racing team is located at Stand 69 of Subsea Expo, and anyone with an interest in viewing the Formula Student car and meeting team members is invited to visit the stand and learn more.