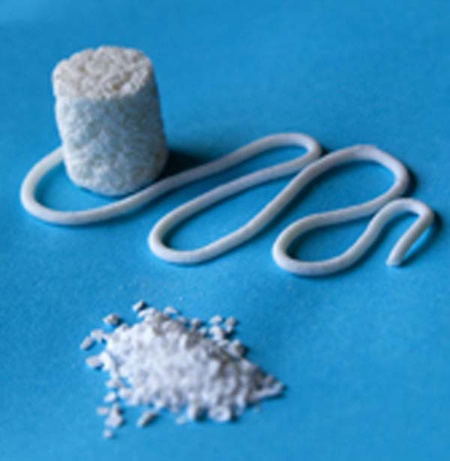 University of Aberdeen spinout company, SIRAKOSS, which has designed synthetic material to replace diseased or broken bone, has announced two US patents that will 'significantly enhance' production.

SIRAKOSS’s synthetic material is proposed to be a preferable substitute to ‘autograft’ which utilises the often painful and invasive procedure of harvesting bone from other parts of the body.

These two new patents add to SIRAKOSS’ existing granted patents in Europe, Japan, Australia and China, and to the company’s core IP estate in the USA, Japan and Australia.

SIRAKOSS’s technology is entirely synthetic, containing no human tissue which, the company says, can be manufactured in consistent, high quality batches.

Surgeon feedback on pre-clinical performance data and handling properties of the SIRAKOSS bone graft substitutes, when compared to currently available products, has been very encouraging, according to the company.

The alternative approach against which all other options are measured is autograft – the ‘gold standard’ - where healthy bone is harvested from the patient’s hip and replanted at the defect site. The amount of bone that is available for grafting is limited, particularly in children, and requires two invasive operative procedures, increasing the risk for the patient and the cost for the hospital.

Other alternatives have seen products derived from cadaver bone, but these can be inconsistent in their performance.

The new patents cover inventions made at the University of Aberdeen by Professors Iain Gibson, Jan Skakle and colleagues.

Dr Liz Rattray, Director of Research & Innovation at the University said: “It is very gratifying to see the progress made by Sirakoss since it spun out of the University in 2011 and that granted patents are resulting from University of Aberdeen research.”

Brian Butchart, CEO of SIRAKOSS, said: “The granting of these two patents endorses the breadth of our technology and provides SIRAKOSS further protection for its unique product offerings in the largest single market for bone graft substitutes.”

Synthetic bone grafts are used in trauma, spinal and dental surgery to fuse bones together to correct congenital or degenerative conditions (such as curvature of the spine) or following a traumatic injury where the bone fails to heal.