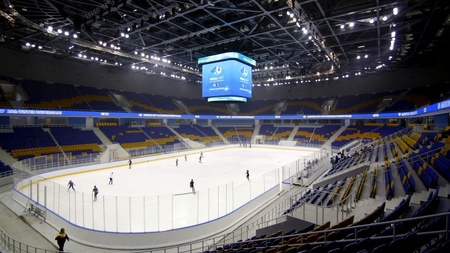 A University of Aberdeen student is set to take to the ice to compete against the world's leading student athletes at the 2017 Winter Universiade - the World University Winter Games.

Christian Johnson, a Geology and Petroleum Geology student who plays for Aberdeen Lynx will represent British universities’ Ice Hockey team during the event, which will see 2,500 competitors from 58 countries go head-to-head.

The Winter Universiade is the biggest global winter multi-sports and cultural event for student-athletes . It takes place over 11 days every two years in a different city. It This year’s event takes place in Almaty, Kazakhstan. Christian will join the rest of the British University Delegation, made up of 65 student athletes and 31 support staff for the opening on January 29.

The event, organised by the International University Sports Federation (FISU) is one of only two senior multi-sport international winter events, alongside the Winter Olympics.

Six years’ of planning and construction has been put towards making the 2017 Winter Universiade a success. In that time, the organising committee have built an array of sporting facilities, including an all-new athlete village, and refurbished many more. 12 sports will be competed across the eight venues in 185 medal events.

Being selected is a fantastic achievement for the athletes concerned - they are each part of national talent programmes, and this event will be a unique opportunity." GB's Chef de Mission for the 2017 Winter Universiade is Neil Rogers

The GB delegation will compete in seven of sports, including their first ever entry into the long track speed skating event. The first of GB’s teams will arrive at the athlete village on 26 January – two days after the village’s official opening date.

GB’s Chef de Mission for the 2017 Winter Universiade is Neil Rogers, Head of International Programmes at British Universities & Colleges Sport (BUCS), said: “I am delighted that Almaty will see the second-largest GB delegation at a Winter Universiade – and competing by some distance in the most number of sports!

“Being selected is a fantastic achievement for the athletes concerned – they are each part of national talent programmes, and this event will be a unique opportunity to experience the camaraderie and excitement of a multi-sport environment as part of their progression along the performance pathway.

“Almaty will provide a stunning backdrop to the team’s aspirations, and we look forward to a successful and truly World Class event.”

Embracing FISU’s motto of 'Excellence in Mind and Body', the Winter Universiade incorporates educational and cultural aspects into 11 days of sports competitions, allowing university student-athletes worldwide to celebrate with the host city in a true spirit of friendship and sportsmanship.