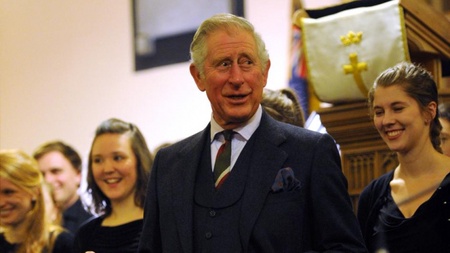 The poetry of Robert Burns will be given a new lease of musical life in a unique recording featuring the University of Aberdeen's world-renowned composer, Paul Mealor, and its much-celebrated Chamber Choir.

A new album, titled The Immortal Memory, will be released under the University’s own record label, VoxRegis on Friday January 20, with all proceeds from the sale of the disc donated to support the projects established in Ballater by HRH The Duke of Rothesay and The Dumfries House Trust following the 2016 floods.

The Duke and Duchess of Rothesay were guests of honour at an event to commemorate the album's launch at a special concert in the village’s Glenmuick Kirk on Thursday (January 12) .

The concept for the record was developed by Professor Mealor, who has received global acclaim for his work which has been performed at a number of high-profile royal events including the wedding of the Duke and Duchess of Cambridge, when he discovered that few choral arrangements for Robert Burns exist.

“Burns is admired the world over for his poetry and songs but despite his enduring popularity, this does not seem to extend into the choral tradition,” he said.

“The richness and depth of Burns’ verse lends itself well to choral performance and with the creation of the University’s record label, Vox Regis, it seemed a wonderful opportunity for a new interpretation of his much-loved work.”

The Immortal Memory follows a traditional Burns Supper and includes many of his favourite works including Auld Lang Syne, Ae Fond Kiss, A Man's a Man and Afton Water.

The University’s Chamber Choir accompany traditional singer Robert Lovie, who was given the honour of performing the national anthem at the opening of the Glasgow commonwealth games, with fiddle music from Raemond Jappy and soprano Jillian Bain Christie.

The Chamber Choir has been invited to perform at a number of high-profile events including the BBC Proms, celebrations for the Queen’s 90th birthday and Songs of Praise.

Their record follows the success of the first disc to be released on Vox Regis which featured the University’s Chapel Choir. It received five-star rating with one review suggesting that Aberdeen ‘now has a choral strength to rival the Oxbridge tradition’.

Professor Mealor said the decision to donate all revenue from sales of the album to the His Royal Highness’s appeal came from strong ties forged with the Deeside community.

“The Chamber Choir has performed regularly at events in Royal Deeside, including at celebrations at Balmoral, in Braemar and in Crathie Kirk,” he added.

“We have got to know the people of this area through our concerts and they have been a tremendous support to the choir over the years. We thought it would be appropriate to give something back in recognition of that support.”

It takes its title, The Immortal Memory, from a new composition by LaVoy written especially for the recording. His work explores the brilliance of Robert Burns and why he is so important to Scotland.

Professor Mealor said: “Because so little choral work for Burns exists, we needed to start from the beginning but our Aberdeen composers have really risen to the challenge and delivered some fantastic new arrangements.

“They remain very true to the original but the addition of choral harmonies brings a fresh interpretation to Burns’ words. The addition of LaVoy’s original composition also adds a modern twist. As a result we hope the album will appeal to Burns’ aficionados as well as those who are new to his work.”

The Immortal Memory is available to pre-order in record stores and online.