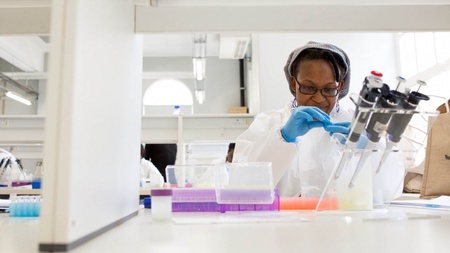 The world's first international research centre for tackling fungal infections which kill around 1.3 million people globally every year has been set up in South Africa by the University of Aberdeen in conjunction with the University of Cape Town (UCT).

Fungal infections kill more people in Africa than anywhere else on the planet. The AFGrica Unit is a unique opportunity to address the urgent need to improve basic knowledge and clinical management of fungal infections in Africa." Professor Gordon Brown

In sub-Saharan Africa, around 50% of people diagnosed with invasive fungal infections die as a result of the infection. For example, in 2008, there were 1 million cases of cryptococcal meningitis in patients with HIV/AIDS, resulting in more than 500,000 related deaths.

Now the University of Aberdeen’s internationally recognised Aberdeen Fungal Group (AFG), is to establish the world’s first research centre focussed on tackling these diseases in Africa.

The £600,000 University of Aberdeen AFGrica Unit will be based at UCT’s Institute of Infectious Disease and Molecular Medicine, headed by Professor Valerie Mizrahi.

The new unit will give the Aberdeen Fungal Group experts a centre of operations in Africa where they can work in collaboration with UCT experts to establish research programmes that can target the priority areas in fungal diseases that are relevant to the continent.

The development supports the ongoing objectives and activities of the prestigious MRC Centre for Medical Mycology, set up at the University of Aberdeen in February 2016. It also builds on an existing Wellcome Trust-funded Strategic Award (led by the Aberdeen Fungal Group), where PhD students from low and middle-income nations (including Africa) are trained in Aberdeen and other medical mycology Centres in the rest of the UK. Upon obtaining their degree, these students then return home with their new skills to help address critical fungal research and training needs in their own countries.

“Fungal infections are understudied and under-diagnosed compared with other infectious diseases, despite their contribution to so many deaths every year,” explains Professor Gordon Brown from the University of Aberdeen Fungal Group, who is leading the setup of the AFGrica Unit.

“Fungal infections kill more people in Africa than anywhere else on the planet. The AFGrica Unit is a unique opportunity to address the urgent need to improve basic knowledge and clinical management of fungal infections in Africa.

“This research and training centre gives us a foothold in Africa and the opportunity to collaborate with our colleagues at UCT to create a truly unique facility that will advance research to combat fungal killers, and just as importantly, to train more African experts specialising in this area.”

"This is a wonderful opportunity to develop a centre of excellence for fungal infections on the African continent. We will have the opportunity to extend the pioneering clinical research on fungal infections taking place at UCT, by collaborating with scientists studying the biology and immunology of fungal infections at the world-leading centre in Aberdeen,” says Professor Mark Nicol, head of UCT’s Division of Medical Microbiology in the Department of Pathology, and member of the IDM.

“The expertise of our world-leading Aberdeen Fungal Group is recognised across the globe and this important partnership with the University of Cape Town will put our experts on the front line in the fight against these infections that currently prove deadly to so many people, especially in sub-Saharan Africa.”

“The establishment of the AFGrica Unit in the Institute of Infectious Disease and Molecular Medicine will enhance the excellent clinical and basic research that is taking placed on cryptococcal meningitis and other fungal diseases in the Faculty of Health Sciences at UCT. This initiative will also contribute to the training of a new generation of African scientific leaders, who will produce high-quality research to combat the scourge of fungal infections in Africa,” added Professor Bongani Mayosi, Dean of the Faculty of Health Sciences at UCT.

About University of Cape Town

Founded in 1829, the University of Cape Town (UCT) has a proud tradition of academic excellence and effecting social change and development through its pioneering scholarship, faculty and students. UCT has 28,000 students, a third of whom are postgraduates and a fifth from other countries. Consistently ranked as the leading university in Africa (QS, THE) and currently fourth in BRICS (THE), UCT aims to be the premier academic meeting point between Africa and the rest of the world.

UCT’s Faculty of Health Sciences’ research enterprise is dynamic and fast growing. It aims to advance and encourage excellent research in the context of the vision and mission of the Faculty and University. Through its 13 departments and 34 research groupings, this Faculty leads high-quality research programmes, trains future research leaders and provides advice and counsel to health organisations around the world, at UCT.  The Faculty hosts UCT’s largest research entity, the Institute of Infectious Disease and Molecular Medicine (IDM) in which the new Wellcome Centre for Infectious Diseases Research in Africa (CIDRI-Africa) is based.

About University of Aberdeen

Established in 1495, the University of Aberdeen is the fifth oldest in the UK and is consistently ranked in the top 1% of the world’s universities.

Located in Europe’s oil and gas capital, the University is renowned for its world-leading research in health, energy, food and nutrition and environmental and biological sciences. The institution is also a cultural leader in the north-east, Scotland and beyond and has an outstanding track-record for arts and humanities research.  A total of 76% of Aberdeen’s research was judged ‘world leading’ or ‘internationally excellent’ through the UK's most recent Research Excellence Framework (REF 2014).

With a community of students and staff covering 120 nationalities, the University of Aberdeen has a global outlook and reach, and in 2016 was ranked by Times Higher Education in the top 40 of the world’s 200 ‘most international universities’.

The Aberdeen Fungal Group is one of the largest medical mycology groups in the world. Its scientists are internationally recognised leaders with a uniquely broad scope of activities.

In February 2016, the MRC Centre for Medical Mycology was created at the University of Aberdeen to spearhead innovative research and training to generate knowledge that will improve the diagnosis, prevention and treatment of fungal diseases. The centre is the first MRC Centre dedicated to the field of medical mycology.