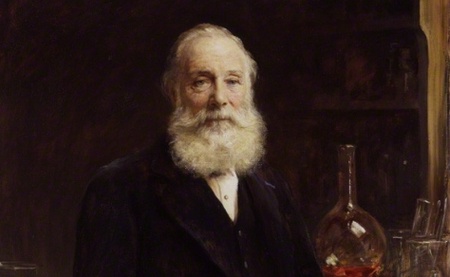 An accidental discovery, which brought a colour only previously available to royalty and aristocrats to the mass market, changed the face of fashion and earned William Henry Perkin a place among the greats of chemistry.

At the age of just 18 while trying to develop a synthetic form of quinine which could be used in the treatment of malaria, Perkin stumbled across the formula for a purple dye he named mauveine and it was patented in 1856.

It quickly captured the public imagination and in the 1860’s the streets of London and Paris, the fashion capitals of Europe, were ablaze with Perkin's colour.

At the Royal Exhibition of 1862 Queen Victoria gave it her seal of approval when she appeared in a silk gown dyed with mauveine. It became so popular it was dubbed ‘mauveine measles’.

But new research from the University of Aberdeen has revealed that Perkin may have been even further ahead of his time than he is currently credited with and toyed with his competitors as the race began to meet an ever-growing demand for synthetic dyes.

Dr John Plater, a senior lecturer in chemistry, has conducted analyses of mauve six pence stamps which demonstrate fluctuations in the manufacturing process.

He says this could indicate a sophistication in Perkin’s understanding of chemical processes years ahead of his time.

“I was given access to a small quantity of the mauveine kept in the Manchester Museum of Science and Industry,” Dr Plater said.

“I also analysed a number of six pence stamps produced using mauveine between 1865 and 1869 as these are a relatively common item from the period and quite easy to get hold of.

“By comparing the two, I was able to see significant differences in the manufacturing process. The museum stored mauveine, which is only available in four sites around the world, has two key ingredients but the mauveine used on the majority of stamps analysed has a very different composition to Perkin’s mauveine and a different method of synthesis seems reasonable.”

Dr Plater says he has been able to recreate Perkin’s original method in the laboratory and suggests that discrepancies in the formulation may be down to an attempt by Perkin to ‘hide’ the true formulation from his competitors.

“Mauveine became a part of Victorian culture and really was the height of fashion from around 1856 to 1866. Even today, the purple colour of mauveine remains a popular image of this period.

This shows that far from the accidental chemist, Perkin really was a true pioneer of his time" Dr John Plater

“It revolutionised the textile and dye making industries. Purple has long been the preserve of royals and the elites of society because it was so difficult and expensive to produce.

“I’ve been able to develop a method which I believe is more similar to the original. This shows that Perkin was well ahead of his time and that although his discovery was accidental, he understood enough about the chemical process to avoid giving away his secrets to competitors.”

Dr Plater does not believe Perkin ever fully documented the infamous method he stumbled across to create mauveine.

“My research suggests that the samples given to the museums are true to the method used to manufacture the mauveine commercially, but are not the same as the mauveine made by his patented method.” Dr Plater added.

“This theory is backed up by the samples obtained from the six pence stamps and evidence from a famous lecture Perkin gave in 1896 where he expressed his concerns about competition.

“It seems to me that he never fully revealed what he did to scale up the production of his famous dye.”

Dr Plater suggests the motivation for this can be found in the difference between the yields produced by the two different processes.

He said: “Mauveine is a very difficult thing to make because the yield is very low. The yields I have been able to reproduce in a lab give around five percent rather than the one percent from his patented method of 1856.

“At just a one percent yield it means 100kg of starting material would be needed to make just one kilogram of dye. On this basis it is clear to see why a more efficient method was needed for mass manufacturing.

“I propose that he used a very early traceless synthesis to modify the composition and improve the yield.

“This shows that far from the accidental chemist, he really was a true pioneer of his time.”