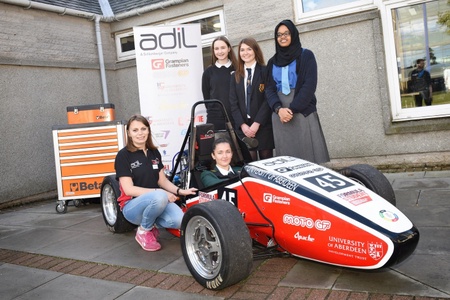 A conference promoting careers in engineering to girls was held in Aberdeen today, with 90 pupils from across Scotland taking part.

The inaugural Girls in Engineering conference - believed to be the biggest conference of its type to take place in Scotland - was held at St Margaret’s School for Girls, in partnership with the University of Aberdeen.

School pupils from across Aberdeen city and shire and as far afield as Glasgow and Edinburgh took part in the day-long event, which included presentations and practical workshops designed to put their engineering skills to the test.

This included a challenge to construct a roller-coaster ramp using everyday materials, and a demonstration of the Team Aberdeen University racing car, designed and built by students from the University’s School of Engineering and raced each year at the Formula Student competition held at Silverstone.

Professor Ana Ivanovic from the University of Aberdeen was among a number of leading female academics, graduates and students who attended the event, which will be held every two years.

She said: “Engineering remains an area which struggles to attract girls in any significant numbers despite their excellent performance in the profession.

“As a female engineer, I was delighted to talk to the girls about the vast opportunities that exist to anyone who is considering studying an engineering subject at university, and challenge any misconceptions they may have.

As a female engineer, I was delighted to talk to the girls about the vast opportunities that exist to anyone who is considering studying an engineering subject at university, and challenge any misconceptions they may have" Professor Ana Ivanovic

“The reception from the girls was very positive, and it was great to see their enthusiasm during the practical exercises.

“I believe the next generation of female engineers have an important role to play in using their creative and team working skills to change perceptions of the industry.

“Judging by the talent and enthusiasm on show at the conference today I’m sure that many of them will go on to become the industry leaders of the future.”

Miss Anna Tomlinson, Head of St Margaret’s School for Girls, said: “We were delighted to welcome 90 girls from 16 different state and independent schools to St Margaret’s today, for the inaugural Girls in Engineering Conference.

“There was a real sense of enthusiasm as the girls took part in the hands-on activities, and all of the students were inspired to hear from strong female role models about the many opportunities available to them in this diverse industry.

“It was a privilege for St Margaret’s to work in partnership with the University of Aberdeen, and we look forward to working together again in future.”