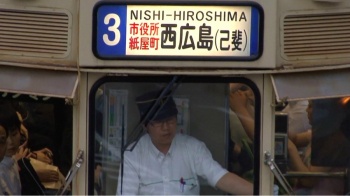 70 years after the atomic bomb was dropped on Hiroshima, The Gallery in the Sir Duncan Rice Library will be showing an experimental observational film by Professor Alan Marcus that reflects on those momentous events from the perspective of life in the city today.

One Hot Day is a 30 minute experimental observational film made a few months after the Fukushima nuclear accident in 2011. In an exploration of time’s elasticity, the filmmaker returns to Hiroshima, the site where a populace were first exposed to nuclear radiation and where the aim was to destroy a major city in a single day.

In marking the 70th anniversary this year since the dropping of the first atomic bomb, One Hot Day uses close observation and multiple metaphors to consider the relationship between the iconic and the banal in a visual study of the immediate area around ground zero in downtown Hiroshima.  In this experiential treatment, we discover contrasts between how tourists and school groups engage with the city’s architectural scars amidst a modernist post-traumatic urban environment.

Professor Alan Marcus, Chair in Film and Visual Culture at the University of Aberdeen, has specialised in films and video installations on post-traumatic sites, such as Auschwitz, Dachau, Hiroshima and Guernica.  His films have been the subject of over 50 conference keynotes and invited talks at universities and museums in Europe, North America and Asia, including at Harvard, Princeton and Cambridge.  His latest research projects include three films in Germany.

There will be a first showing of One Hot Day on Thursday 24th September at 7.30pm after which Professor Marcus will be answering questions about his film.

The film showings continue throughout the exhibition period until 7thOctober.

For more information or to reserve a place at the event on Thursday 24 September, please contact scc.events@abdn.ac.uk or call 01224 273049