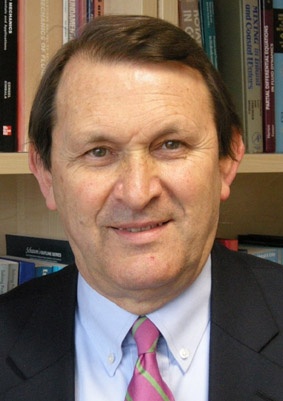 Observations on the sea surface can often be misleading. Even with flat, calm conditions, powerful waves capable of destroying underwater vehicles, tilting offshore rigs and halting a ship at full power can still exist deep within the ocean. Professor Peter Davies will discuss modelling these so-called internal waves and the ways in which we may predict their behaviour in the ocean in the future.

Professor Davies was appointed a Personal Chair in Fluid Dynamics at the University of Dundee in 1995, the same year that he was elected a Fellow of the Royal Society of Edinburgh. His work in the fields of physical, environmental and geophysical fluid dynamics, which spans almost 40 years, was recognised this year through his election as a Foreign Member of the Norwegian Academy of Science and Letters.What lies beneath? is the first in a new series of lectures by leading experts in the field of engineering. The series commemorates RV Jones, one of the University of Aberdeen’s most distinguished professors, who played a key role in the defence of Britain during World War II.A drinks reception will be held afterwards.