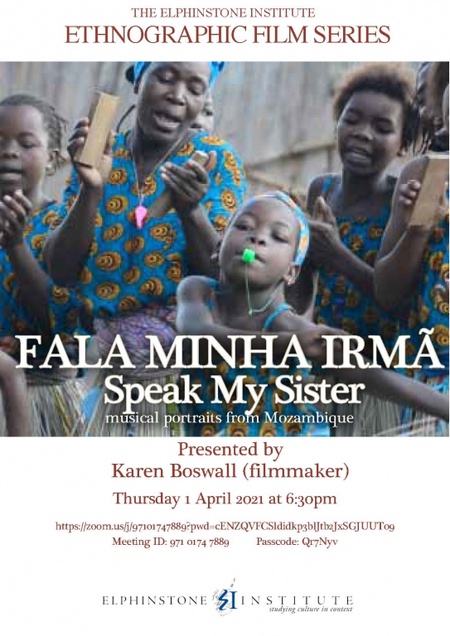 Women's Music and Dance from Mozambique

Speak My Sister is a web documentary based around a series of six musical portraits of Mozambican women who draw on their creative voice to bring about social change. For the Elphinstone Institute Ethnographic Film Series, film maker Karen Boswall will be presenting and discussing material from these films. The six portraits were researched, filmed and edited by film, media and cultural studies students from the Higher Institute of Art and Culture in Mozambique’s capital Maputo. They offer a Mozambican reflection on the role of women in forming Mozambican cultural identity and contributing to sustainable development in the country. Expressed through personal testimony, poetry, music and dance, the films go behind the traditional Mozambican dance forms of Tufo, Xingomana and Xigubu and the contemporary popular genres of Pop fusion, Gospel and Hip-Hop. In addition to these portraits there are also short films from behind the scenes shot during her practice-led doctoral research where she supported the production and exhibition of the films.

Karen Boswall is a filmmaker, ethnomusicologist and visual anthropologist. She lived and worked in Mozambique as a musician, journalist and documentary filmmaker between 1990 and 2007. Her award-winning films and radio documentaries explore the spiritual, cultural and environmental worlds of individuals and communities through their music and dance practices. Her films include individually authored and collaborative productions from Nicaragua (1984), UK (1986), Iraq (1993), Cuba (1995), Mozambique (1997-2018), Jordan (2014), Nepal (2016) and Brazil (2019).  She has taught Visual Anthropology and Film and Television at the University of Kent (2008–2009), Canterbury Christ Church University (2010–2014), Manchester Metropolitan University (2015-2016) and the University of Sussex (2017 – 2019). She conducted her doctoral research in collaborative music research and film production in Mozambique and continues to use collaborative and decolonial audio-visual methodologies to support those working on improving their access to basic human rights in Mozambique, especially women and girls.

The presentation will be preceded by two 5-minute films made by Iain Fraser and Jan Tavendale, students of the MLitt in Ethnology and Folklore at the Elphinstone Institute, 'Iain Kinnear, Bagpipe Maker' (2020) and 'Grain from Ground to Girdle' (2020)