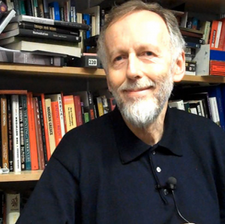 A public lecture by Prof. Ian Christie (Birkbeck College) on 'The Mystery of Robert Paul's Aberdeen Film and Other Puzzles about Britain's Neglected Pioneer'.

Ian Christie is Professor of Film and Media History at Birkbeck College, and has published extensively on British, Russian, and American filmmakers - Powell and Pressburger, Eisenstein and Scorsese in particular. He has also co-curated many exhibitions bringing film into relationship with other arts: Spellbound marked the centenary of cinema at the Hayward Gallery in 1996; and recently he contributed to the Royal Academy exhibition Revolution: Russian Art 1917-1932.

As a broadcaster, he wrote and co-produced the BBC2 TV series The Last Machine in 1994, presented by Terry Gilliam, and this led to a twenty-year project to rescue the British film pioneer Robert Paul from oblivion.

His book Robert Paul and the Origins of British Cinema has just been published by Chicago University Press, accompanied by a graphic novel, Time Traveller, and a touring exhibition, currently at the National Science and Media Museum in Bradford. Blog: https://paulsanimatographworks.wordpress.com/