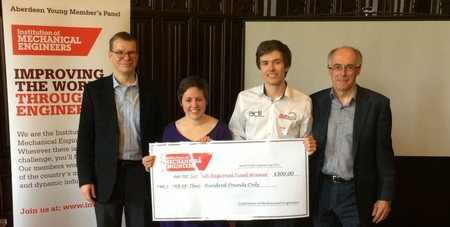 A University of Aberdeen student has won the Institute of Mechanical Engineers (IMechE) Speak out for Engineering Scottish regional finals, with a presentation based around his experiences with Team Aberdeen University Racing (TAU Racing).

Mechanical Engineering student George Wilmot’s presentation – ‘the design of an airbox for a Formula Student car’ – was based on his involvement in building a single seat race car to compete at the annual Formula Student competition at Silverstone.

The IMechE event, which was held at Aberdeen’s Town House, brought together three finalists from different areas of the mechanical engineering industry, who were selected through regional heats to pit their communication skills against each other in a 20 minute presentations.

George’s presentation was focused on his involvement in optimising the intake system of TAU Racing’s race car to maximise engine performance, and it was his ability to demonstrate his understanding of this project that saw him claim the title of Champion of SOFE 2016 for the Scottish region.

I would like to thank the University's Formula Student Team, TAU Racing, who supported me throughout my project - I am proud to have been able to represent the University" George Wilmot

“My presentation was based on my fourth year research project, and I am delighted that it helped me win the Scottish finals for Speak Out for Engineering,” George said.

“I would like to thank the University’s Formula Student Team, TAU Racing, who supported me throughout my project and I am proud to have been able to represent the University.”