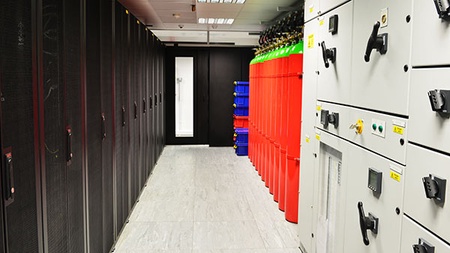 The pioneering project to create a new cutting edge and low carbon IT data centre for all the further and higher education institutions in north-east Scotland has scooped a national industry award.

Judges described it as an example of true data centre transformation, which stood out from other entries in the category for many reasons. The project will be featured in depth in a future issue of Computer Weekly.

Following the ten-month project, the new data centre, based at the King’s College campus of the University of Aberdeen, now hosts the IT infrastructure for the four institutions. The project has reduced the sector’s carbon footprint by more than 1,400 tonnes annually, as well as slashing energy bills by more than a quarter of a million pounds each year.

Using the external supplier Workspace Technology Ltd and specialist in-house staff, the major objective was to spearhead a shared-service approach, while delivering significant institutional savings by allowing institutions to vacate current environmentally unfriendly facilities which were unsustainable based on current performance and future requirements. The capital funding for the upgrade project was provided entirely by the four partner institutions.

This project is an example of a true data centre transformation. To only have 40 minutes of downtime is incredible, especially with the work that was undertaken. Whoever was project managing this transformation should be given a bottle of champagne!" Awards judge John Rakowski

Unplanned outages across the ten months totalled less than 40 minutes.

Awards judge John Rakowski, analyst and advisor for infrastructure and operations at Forrester Research, said: “This project is an example of a true data centre transformation. Many organisations would suffer from a number of downtime periods but to only have 40 minutes of downtime is incredible, especially with the work that was undertaken. Whoever was project managing this transformation should be given a bottle of champagne!”

Judge Clive Longbottom, founder of Quocirca, said: “This entry shows how a proper approach to shared services can lead to a much more efficient and effective data centre being put in place that meets the needs for multiple users.

The third judge, Spencer Izard, IDC research manager, added: “Like many organisations in the current economic climate, academic institutions are challenged with providing the best IT services at the best operational price point. This entry stood out from the others due to its shared services approach, backed by an energy efficient design, a transition that saw minimal service interruptions, and better use of infrastructure to decrease complexity and operational footprint whilst maintaining quality of service.”

“This was a large-scale, complex and high risk project to upgrade an operational live data centre at the University of Aberdeen”, said Project Chair Brian Henderson, who is Head of Service Management for IT Services at the University of Aberdeen. “Hundreds of servers from the four institutions had to be relocated, as did major networking equipment serving schools and educational institutions across the North-east of Scotland.”