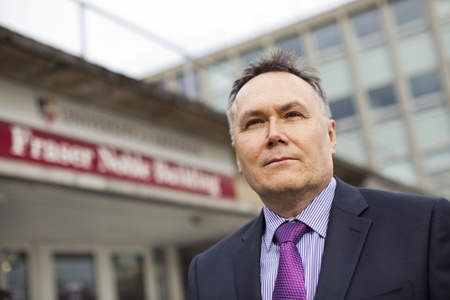 Professor Guz joined Aberdeen in 2002 as a Lecturer, becoming personal Chair in Engineering in 2007 and the Sixth Century Chair in Solid Mechanics in 2010.

In 2004 he founded the interdisciplinary Centre for Micro and Nanomechanics (CEMINACS) in Aberdeen, an internationally recognised centre of excellence in mechanics of heterogeneous media and is currently Editor-in-Chief of Composites and Advanced Materials and Director of the NRPe (Northern Research Partnership in Engineering).

In 2013 Professor Guz was appointed Head of the School of Engineering, serving two full terms during a period of significant growth in the School’s research and teaching activities and improvement in national and international rankings. He stepped back from the role earlier this year and was succeeded by Professor Ekaterina Pavlovskaia.

I've had an incredible journey in Aberdeen over the past 20 years, which would have been impossible without the tremendous support I was privileged to receive from everyone I've met at the University." Professor Igor Guz

Reflecting on his time at the University, Professor Guz commented: “I’ve had an incredible journey in Aberdeen over the past 20 years, which would have been impossible without the tremendous support I was privileged to receive from everyone I’ve met at the University.

“I am truly grateful to all colleagues for their friendship, guidance and patience over the years. I enjoyed my time here enormously and will always cherish my memories of Aberdeen.”

Congratulating Professor Guz on his appointment, Senior Vice-Principal Karl Leydecker said: “Igor served as Head of School with distinction for 8 years, during which time the School of Engineering made significant progress in its teaching and research activities.

“While I am sorry that he is leaving the University, he leaves a strong legacy that will stand the School in good stead, and I wish him all the very best for the next stage in his career.”