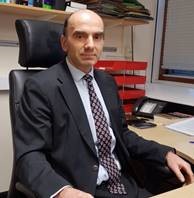 Professor Dragan Jovcic from the University's School of Engineering has been named an IEEE Fellow for 2021.

Professor Jovcic has been recognised for his contributions to improvements in multi-terminal HVDC transmission grids and development of HVDC transformers. This work plays an important role in the development of new electrical power transmission systems essential to support the transition to energy supply based on large scale renewable sources.

The IEEE Grade of Fellow is conferred by the IEEE Board of Directors upon a person with an outstanding record of accomplishments in any of the IEEE fields of interest. It is the highest grade of membership and is recognised by the technical community as a prestigious honour and an important career achievement.

Prof Jovcic is a founder and director of Aberdeen HVDC Research Centre which has hosted numerous research projects supported by EU research council (ERC), UK research council (EPSRC) and directly by industry, related to electrical transmission networks and components. Professor Jovcic is acting as editor of three IEEE journals and has also contributed to international pre-standardisation work through his role as chairman of CIGRE working group B4.76 and has represented UK in four other CIGRE working groups. He has contributed to over 150 publications and authored a book on High Voltage Direct Current Transmission

He said: “I am honoured to be recognized by professionals in IEEE, and much humbled to join the group of so many great Engineers”

The IEEE is the world’s leading professional association for advancing technology for humanity. Through its 400,000 plus members in 160 countries, the association is a leading authority on a wide variety of areas ranging from aerospace systems, computers and telecommunications to biomedical engineering, electric power and consumer electronics.

The IEEE publishes 30 percent of the world’s literature in the electrical and electronics engineering and computer science fields and has developed more than 1300 active industry standards.