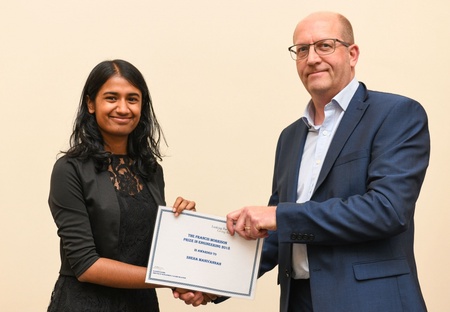 Engineering students at the University of Aberdeen have been honoured for their achievements at a prize-giving event that took place this week.

The annual event, which takes place at the University’s School of Engineering, is held at the start of the new academic year, with twenty prizes available to undergraduate students who have excelled in their field of study.

This year’s prize-giving included a talk by Dan Peck, Capital Planning Manager of the Aberdeen International Airport, on the past, present and future of the airport.

Among the prize-winners was Ellen Katsipanos, who won the Inspiring Future Female Engineers Prize in recognition of her efforts to inspire the next generation of talented female students to take up STEM subjects, through her role with the University’s Formula Student racing team (TAU Racing).

Ellen, who graduated with a First Class Honours degree of Master of Engineering in Mechanical Engineering, was the team’s Head of Composites & Aerodynamics.  Last year she was awarded the Aberdeen Mechanical Society’s R. V. Jones Trophy for her project on redesign of a Formula Student rear suspension system.

Meanwhile, Sneha Manivannan, who graduated top of the class with a First Class Honours degree of Master of Engineering in Chemical Engineering, won the Francis Morrison Prize in Engineering - awarded to the most distinguished graduating student.

Professor Igor Guz, Head of the School of Engineering, congratulated all of the award winners and paid tribute to their dedication and hard work.  “We are proud of the academic achievements of our students and delighted to recognise and celebrate academic excellence,” he added.

We are proud of the academic achievements of our students and delighted to recognise and celebrate academic excellence" Professor Igor Guz, Head of the School of Engineering