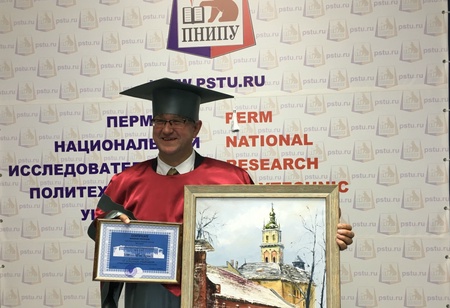 Professor Marian Wiercigroch from the School of Engineering has been awarded a prestigious honorary professorship by a leading Russian research university.

The award from Perm National Research Polytechnic University (PNRPU) was given in recognition of his contribution to teaching and research at the institution, which is a major centre for oil and gas research in Russia.

Professor Wiercigroch was awarded a jubilee Honorary Professorship, the 25th in the history of the PNRPU.

He received the honour while undertaking a joint research project with Dr Vladimir Poplygin from PNRPU on ‘Innovative Energy Saving Technologies of Oil Field Exploration and Control’ and delivering a masterclass in drilling engineering over the past three years.

I am honoured to receive this distinction, which reflects the international standing of the University of Aberdeen's research and teaching expertise" Professor Marian Wiercigroch

The masterclass was tailored to final year undergraduate students at PNRPU, as well engineering professionals from the Russian oil and gas industry.

Commenting on his honorary professorship, Professor Wiercigroch said: “I am honoured to receive this distinction, which reflects the international standing of the University of Aberdeen’s research and teaching expertise, while encouraging closer ties between our institutions.”

Professor Igor Guz, Head of the School of Engineering, added: “I am delighted with Marian’s recognition as he undertakes cutting edge fundamental research and develops new technologies applied to oil and gas.”