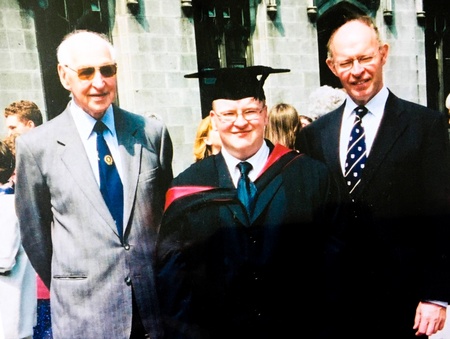 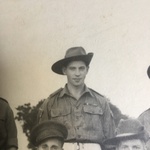 A career as a doctor, one of the oldest and most loved professions, is always going to be challenging but highly rewarding and it is exactly what three generations of one family chose to do.

For Father’s Day we take a look at the different paths their careers took and at the changes to the teaching and practice of medicine they have seen.

Alex Adam, who died in 2009, had his medical career accelerated when he graduated a year early in 1942 at age 21 to join the army and assist with the Second World War effort as a medical officer. He travelled to Africa to join the 81st West African Division then served in India and Burma for three years.

His son Alistair said: “Like many of his generation he didn’t speak much about the war days. Where he was posted in Burma, they lost more men to disease than to enemy action. When there wasn’t much happening, he urged the troops to dig sewers and that was very useful. It must have been a horrendous experience.

“On his return he trained as an Orthopaedic Surgeon in Aberdeen, Inverness and London and became a consultant at Aberdeen Royal Infirmary. His generation saw the introduction of the National Health Service in 1948 – which I think is something we got right and can be proud of.”

Alex became a Consultant Orthopaedic Surgeon and Honorary Senior Lecturer at the University in 1956 and continued in this role until retirement in 1983. He performed the first hip replacement operation in the city in 1969. He was Honorary Librarian for the Medico-Chirurgical Library at Foresterhill, and a commissioned portrait of him is proudly displayed in the Aberdeen Med Chi Council Chamber. He was made Honorary Professor of the History of Medicine at the University and helped many successive years of medical students with various projects.

Alistair said: “I was inspired by my dad; I got the grades and it seemed to me to be a good career. It followed naturally that I would study at Aberdeen.”

Alistair, who spent his career in general practice at Nairn, said “I loved being at university. I did the six-year course from ages 17 to 23. I was at King’s, then Marischal College then Foresterhill. It was a case of learning medicine and growing up and enjoying yourself at the same time. It was terrific. We had tremendous teachers, fantastic personalities. Our class always held a reunion every five years and I have some classmates I am still in very regular contact with. “

Alex, who retired in 2009, also inspired his grandson Neil.

Neil said: “I had grown up being known as the doctor’s son in Nairn and I also had a close relationship with my grandfather. I always knew I wanted to be a GP. I liked the idea of a rural practice and being part of the community but I ended up staying in Aberdeen. I always wanted to come to Aberdeen and it was a fantastic experience. I believe I was one of the last years to be at Marischal and to carry out full body dissections with eight students to a body. I enjoyed my time so much I have stayed ever since.

“When I worked as a junior doctor in Aberdeen, I became closer to my grandfather. I would visit him on a weekly basis and cook his tea. I ended up living with him for a spell in his sheltered accommodation before I bought my first flat, which was quite an experience. I was in my early twenties at the time – the youngest in the flats by a long way. He was always interested in what I was doing and he was quite happy to put me right. I think he would have been quite a formidable man to be taught by and also as a consultant but he did give me a lot of good advice.”

Neil, who is currently a GP at Calsayseat Medical Group, said the coronavirus and current health crisis has brought many challenges to the medical profession including not being able to see patients face to face.

He said: “You are often working right at the edge of your confidence simply because you can’t see people. Not being able to see people takes away some of the joy of the job – for me it has always been the most enjoyable part. However, video consulting has been very successful.

“A lot of my patients are experiencing difficulties with their mental health as a result of the lockdown. There are anxieties over what the future holds, financial difficulties as well as people who have been isolated for prolonged periods of time. We serve some of the most deprived areas of the city and it has been a struggle for many people. I’ve found people have been quite apologetic when contacting me. They should not feel like this – it is what we are here for at the end of the day and I am pleased to see them. I would prefer it to be in person but it is great to see more people using technology, especially the older generation, who traditionally are high users of the health service. I’ve had patients emailing in photos which is helpful. There are concerns of course that there are people not contacting us or who are unable to do so. Over time we will get back to a new form of normal and get back to continuity.”

When asked what the best part of the job for him was Neil said: “The opportunity for lifelong learning. I’ve worked in orthopaedics; substance misuse and I’ve also learned acupuncture. It’s a career where you can travel and have flexibility. I would absolutely recommend it.”

Alistair added: “I had a good all-round experience. Nairn has a GP hospital and we did a lot of teaching. I was always very impressed by the medical students. They seemed to receive a very broad education and were outstanding. I feel very sorry the students this year have not been able to graduate in person but I would like to offer my congratulations to all those who have graduated MBChB from Aberdeen.”

He added: “On behalf of three generations of Aberdeen doctors - be the best doctor you can; you will have a rewarding and amazing career. Best wishes for the future.”