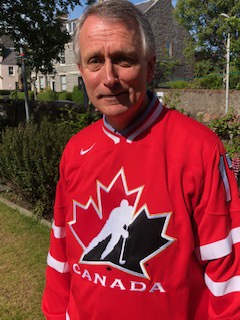 As a Canadian who came to the University of Aberdeen seven months ago to become Executive Director of Advancement, I want to wish all our alumni in Canada a very happy Canada Day 2020! I hope this finds you well and healthy during these challenging times!

This is a good occasion to share something of what I have learned about the many links between our great University and Canada since my arrival. It is clear to me that our alumni have made their mark in countless ways in the development of the country and continue to contribute to the present day through all of you.

Since coming here, I’ve discovered numerous Aberdeen links to Canada. Canadian connections to the energy sector here are many, as are the academic and research relationships between Canadian universities and our University.

Our shared history is rich with such relationships. John Strachan, a King’s College Aberdeen alumnus, founded in 1827 and was first president of King’s College, forerunner to the University of Toronto, named for his alma mater. Marischal College graduate James Moir Ferrie was owner and editor of the Montréal Gazette.

Sir William MacGregor, University of Aberdeen graduate and prominent medical doctor and tropical disease specialist, served as Governor of Newfoundland and played a leading role in battling a tuberculosis outbreak during his time there.

Sir William Hamilton Fyfe served as Principal of Queen’s University in Kingston (known as the Limestone City, built by Scottish stonemasons, and reminiscent of Aberdeen, the Granite City), and followed that tenure by becoming University of Aberdeen Principal in 1936. He is buried in St. Machar’s Churchyard in Old Aberdeen.

Dr JJR Macleod, a Marischal College graduate, worked with Canadian research colleagues at the University of Toronto which led to the discovery of insulin and earned him a Nobel Prize in 1923 with his Canadian colleague Dr Frederick Banting.

These connections are rich and deep and are to be celebrated always, but perhaps especially on this Canada Day 2020. I hope this is a bit of good news amidst the pandemic which has impacted both countries, and indeed the world. Let’s raise a glass to Canada and to its historic and strong links to Scotland and to the University of Aberdeen. Happy Canada Day!