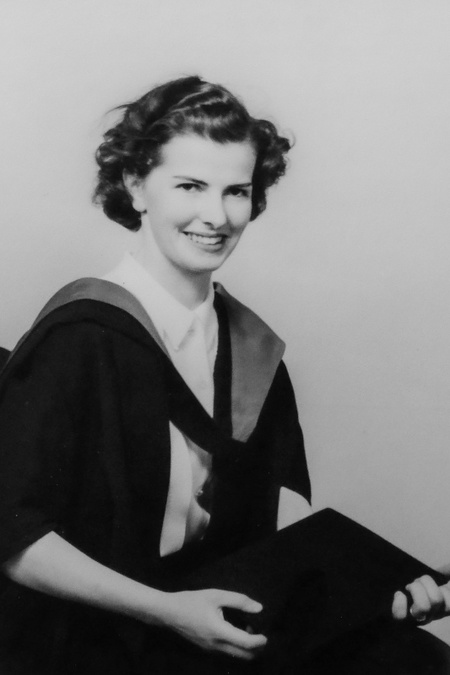 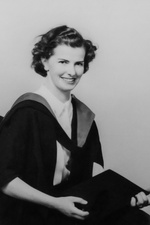 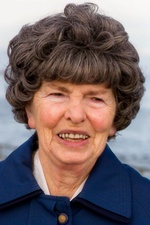 On the 72nd anniversary of the NHS we spoke to Colin MacKenzie who paid tribute to the medical career and remarkable life of his aunt Dr Myrtle Farquharson (MBChB 1954) who sadly died in August last year, aged 88.

Dr Farquharson, who was passionate about medicine and medical education, has left a generous and substantial legacy to fund cancer research at the University of Aberdeen.

Colin, a musician, said: “Throughout her life she was passionate about helping people. She was always interested in education; it was very important to her. She really enjoyed her career and she had a fierce work ethic – well over 100-hour weeks were the norm for her.

“After graduating from the University of Aberdeen her initial years working in medicine, between 1954 and 1963, were spent in training posts in hospitals in Britain. She trained in general medicine, surgery, orthopaedics, obstetrics and anaesthetics.

“Her name hit the headlines in November 1962, when she was working as a locum doctor in Aberdeen. She received a call that the Aberdeen lifeboat, would like the assistance of a doctor, to aid an injured Danish skipper who was 80 miles out at sea in a force nine gale.

“Apparently all the lifeboat crew had been seasick. They said that Myrtle’s remark that "it was awful" was a huge understatement. Every one of the crew paid tribute to her courage and devotion, which was evident in her first question, as she stepped ashore… “How is the patient?”

“Unfortunately, her efforts were in vain. The injured skipper was brought into port in his own Danish trawler after the vessels failed to make contact in the storm-tossed North Sea. A radio fault severed the only link for the searchers, and of course this was before the days of GPS.

“After battling for 14 hours, the first ever woman doctor to go out of Aberdeen on a lifeboat rescue stepped ashore seasick, exhausted but still smiling.

“She received letters of commendation from the RNLI and the House of Lords for her efforts and I recall received at least one marriage proposal off the back of her photograph being in the national newspapers which she didn’t follow up.”

Myrtle, who had been described by the Queen’s Surgeon George Gordon Bruce, as "one of the most intelligent students in her year" while studying medicine at the University, worked all over the UK. During a spell in Glasgow, she took up a three-year contract as a Medical Officer for Public Health for Glasgow Corporation. This gave her time for post-graduate studying and she attended Glasgow University. She was very briefly married to another doctor who was a widower with two young children. Myrtle had mostly stopped working as a doctor and realising she missed clinical medicine she decided to emigrate to Canada.

Colin said he recalls his aunt saying that she felt opportunities for promotion and advancement at the time were particularly difficult for women. As a result, Myrtle felt there would be better opportunities abroad and moved to Canada in 1966.

Colin said: “She was immediately appointed as Director of The Peace River Health Unit in Northern British Columbia. This was in Dawson Creek on the Alaskan Highway. She was responsible for public health over an area which covered 100,000 square miles.  This is greater than the size of mainland Britain.

“One of her duties was TV appearances to promote public health programmes. She also travelled a great deal, occasionally with armed Royal Canadian Mounted Police in search of dangerous members of the public. Myrtle learned how to remove a wheel and set fire to a tyre should she get stuck in cold weather. On journeys they would have to phone ahead every 50 miles so that emergency services would be notified of a non-appearance. Temperatures could reach -40F. All the death certificates came to Myrtle’s desk and every year the cause of death on several would be frozen to death.”

In 1968 after two winters and having had enough of the sub-arctic weather, she moved to a General Practice in White Rock, a small coastal town just south of Vancouver and with a Mediterranean climate.

In 1981 after 11 years in British Columbia and a year in Ontario doing what she described as “stimulating but exhausting work” - where a typical day consisted of 6 hours in the operating room in the morning, 4 or 5 hours in the office in the afternoon, and then 4 or 5 hours in the hospital in the evening – she started her Middle East career. Myrtle worked in government, military and private hospitals in Jeddah, Abu Dhabi, Qatar, Mushayt and Riyadh.

Colin said: “She worked mainly on two-year contracts. The pay was good and workload was much reduced. She now worked a 40-44-hour week.

“She found it exciting to be working with people from many different countries.”

Despite working all over the world Myrtle was very close to her family. Her career had inspired her sister Aileen to go into nursing and on occasion they did 2-week trips together in the Eastern Mediterranean with Myrtle as the ship’s Medical Officer and her sister assisting as the nurse!

Colin said: “Wherever she was in the world she would come back and take her mother on holiday as well as spoiling me and my sister.”

In February 1993 Myrtle retired from her medical career; however she went on to volunteer with Aberdeen Citizens Advice Bureau for over 20 years and worked at Drum Castle for over 8 years.

She joined the Mannofield Hill Walking Club and enjoyed walks in her favourite part of the world, Royal Deeside.

She also enjoyed many foreign holidays and kept her language skills up – speaking Arabic, French and Italian as well as Latin.

Towards the end of 2015 aged 85, Myrtle became unwell and required help from the NHS.

Colin said: “Myrtle had colon cancer and she had a major operation to have part of her colon removed. I called up on the day of the operation and to my great surprise Myrtle was sitting up in bed. On the Friday she was already walking around the ward. On the Saturday she wanted to go out for a run in my car. The main reason she wanted to be well again was to care for my mum. In 2016 they both moved into Deeside Care Home where they were well looked after. Sadly my mum died in November 2016, which was very hard for Myrtle. She never lost her spirit though and enjoyed her last years with friends and family rallying round.

“She was a very independent woman and had a great sense of humour. She dedicated her life to others and as a family we have so many happy memories of her. Everyone should have an Auntie Myrtle!”

The University of Aberdeen's Executive Director of Advancement Rob Donelson said: "We are incredibly proud of Myrtle's career and achievements. The dedication she has shown to medicine, medical education and helping others is truly inspiring.

"We are very grateful to her for the generous bequest she has left for cancer research at the University and to her nephew for sharing her remarkable story."