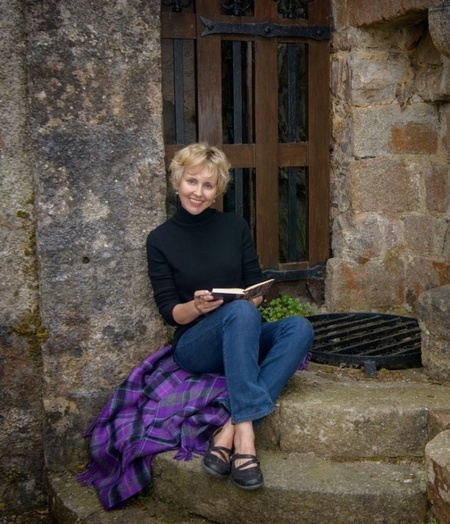 In this interview, University of Aberdeen alumna Kimberlie Hamilton talks about fostering a connection to the University through history. Both her stepchildren have studied at the University of Aberdeen, and she herself has studied here twice. Kimberlie co-leads the John Macleod Memorial Statue Project, founded to draw attention to a lesser-known hero of history - fellow Aberdeen alumnus John Macleod who discovered Insulin in 1922.

Q. What’s your personal connection to Aberdeen and the University?

I have studied at the University of Aberdeen twice, about 30 years apart. The first time was back in 1988-89 when I came over from America on a Rotary International Foundation Scholarship. The second time was after I’d moved from California to Aberdeen in 2017 to be with my partner John. I already had a master’s degree (in Screenwriting from the University of California, Los Angeles) and never thought I’d go for a second one, but I couldn’t resist applying for a relatively new programme at UoA called Cultural & Creative Communication - three of my favourite things! It was a wonderful programme that provided me with an ideal foundation for my current involvement with the JJR Macleod Memorial Statue project. I’m so happy to put everything I learned at UoA to good use, and for such a worthy cause.

Q. Why do you think both of your stepchildren have chosen to study at the University?

The programmes they were interested in either weren’t offered at other universities or weren’t as desirable as Aberdeen’s for various reasons. The prestige of a degree from the fifth oldest university in the UK was no doubt a factor as well.

Q. Are there any anecdotes about your time at University that you’d be happy to share?

Before I was awarded my Rotary Scholarship in the late 1980s, I had never been out of the USA and was the first in my family to attend university, so I was quite clueless about where I should apply to study. I remember poring over a map of British universities and thinking, “Aberdeen looks so far north, there likely won’t be too many Americans way up there.” Then I got here and discovered how wrong that assumption was – there were loads of Americans here, and most of them were from Texas! So that was a good lesson, to consider other factors besides location when choosing a university.

Fortunately, Aberdeen turned out to be a good choice for other reasons…I met my future (way in the future) partner here. When I was a student for the first time in ’88-’89, I had a part-time job at a sweet shop John once co-owned, Truly Scrumptious. Neither of us ever dreamed I would move back to Aberdeen 30 years later, and we still can’t quite believe it. My friends and family can’t believe it either, as I’m a sun-worshipping California girl, but I’ve really fallen in love with Scotland. We don’t have any castles or sheep back in Los Angeles!

Q. How would you say being part of the Aberdeen family has impacted your career and outlook on life?

Attending UoA on a Rotary Scholarship was truly a life-changing experience for me. Living in a foreign country gave me a different perspective on the world, and the University itself introduced me to British literature and culture, both of which have greatly influenced my career as a writer, filmmaker and educator. Also, I am someone who is curious about practically everything, so having the opportunity to be a 50-something graduate student in 2018-19 was one of the most enjoyable experiences I’ve had so far in Scotland.

Q. You are quoted saying that everyone in Aberdeen should know and be proud that Macleod studied and returned to teach at UoA. How do you think current students and alumni can foster a connection to the history of the Aberdeen family?

As a historian and a children’s author, my passion is telling stories, particularly stories based on real people, animals and events. There are so many great stories right under our noses, and one of my goals – and I suspect one of the University’s goals – is to discover and showcase those stories. My UoA experience was somehow richer and more meaningful because I had a sense of who had gone before me. I always stopped to read the historical plaques scattered around campus, for example, things like “so-and-so taught here in the 1600s” and found it rather thrilling to be walking across the same cobblestones those illustrious people once tread themselves. Maybe only history buffs like me get weirded out by this kind of stuff!

So much of history is overlooked or forgotten…here’s just one example that recently came to my attention. A retired diabetologist in Aberdeen revealed in an interview that he had never heard of JJR Macleod until he read about him in The Discovery of Insulin. This was despite having attended the same school and university as Macleod and studying in Macleod’s Physiology department at UoA only 14 years after his death. (You can read about this story here: The airbrushing from history of the Aberdeen insulin pioneer (abdn.ac.uk))

I find this story absolutely mind-boggling. My partner has Type 1 diabetes, so we were inspired to bring attention to this “unsung hero” of Aberdeen by commissioning a life-size statue of Macleod. My role in the project will be to help tell his story as it should be told, so that John Macleod’s name is never forgotten, particularly right here in Aberdeen.