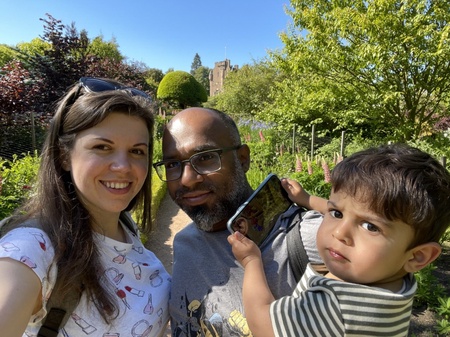 Eleonora and Suganth are from opposite sides of the world. In university halls, they not only met each other but formed a tight-knit family with other residents who still gather to attend weddings, birthdays, and just to see each other again. This is their #LoveAtUoA story.

Eleonora Kapsule, who is from Latvia, entered her first year at the University of Aberdeen studying european management whilst her now-partner Suganth Sundaramoorthy, from Malaysia, enrolled straight into third year of his mechanical engineering with management degree. Despite being in different courses and years they had several management classes together in which, Eleonora likes to tease, Suganth got top marks because of her expert tutoring.

Eleonora ended up at the University of Aberdeen by pure chance. Initially wanting to study in Spain she attended a study abroad fair where a UoA alumnus in a kilt gave a presentation on the benefits of Scottish higher education. Convinced by the flexibility in course choices and SAAS funding, Eleonora applied to the University, where she ended up meeting her future partner, Suganth. Meanwhile, Suganth came to study at the University of Aberdeen from Malaysia because Scotland was one of the few countries that allowed him direct entry into third year as he already held a diploma in mechanical engineering.

Living at Hillhead Student Halls, Eleonora and Suganth kept catching glances of each other through windows and around the hallways but only met properly when attending the same party. Suganth’s flat in Block 26 of Hector Boece Court in Hillhead Halls would end up being the epicentre of many gatherings and eventually result in the formation of the “Block 26 Family”. Eleonora was aware of the happy crowd frequenting Hillhead Halls for a few weeks before she simply had to join them. The group consisted of Erasmus students from Germany, Austria, Spain, and France and was so international that the only Scottish member was called ‘The Foreigner’. Despite being from every part of the globe, the bonds they formed were so strong that they’re still in touch today.

After graduating, Eleonora secured a job at Aberdeen City Council. She had written her dissertation on Aberdeen City Council and always quipped she’d needed to see her research subjects in their natural habitat. Combining her interest in languages and maths, Eleonora is now working in IT and studying towards a second degree in software development from RGU. She jokes that, though she’ll never forget her alma mater, she’s now above the friendly rivalry between UoA and RGU.  Suganth has also established a career in his field, working as an engineer in HVAC and refrigeration. They still live in Aberdeen, and the Block 26 Family still gathers for important life events or simply because they miss each other ‘just as a family would’.

Eleonora and Suganth often say that their story is out of order. They moved in as housemates before falling in love, decided to get married years before officially getting engaged and had a baby before marrying. But one thing is clear, had it not been for the University of Aberdeen, a fair amount of chance and their Block 26 Family, they would have never met. “This is our story, Eleonora writes fondly, and we wouldn’t have it any other way”.