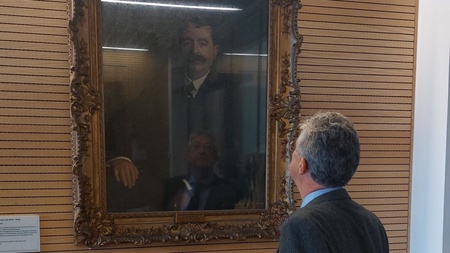 John Quiller Rowett's grandson Jan Chojecki was welcomed to a special lecture as part of celebrations to mark 100 years since the establishment of the Rowett Institute.

In 1920 John Quiller Rowett donated £20,000 (nearly £1m in today’s value) which unlocked matched funding from the Government and enabled the purchase of land as well as the building of a stand-alone research institute.

In recognition of his incredibly generous gift, it was named the Rowett Research Institute and was formerly opened by Queen Mary in 1922.

This name was retained when the Rowett Institute became part of the University of Aberdeen in 2008.

Today both John Quiller Rowett and John Boyd Orr, the Institute’s founding director, are represented in the reception area of the purpose-built building at Foresterhill which opened in 2016.

“Jan and Stephen have both dedicated their careers to science and it was fitting that our students and staff had the opportunity to meet them and discuss the truly ground-breaking studies on diet and health which are being done here.

"The health challenges facing the country will only be addressed if sustainable nutrition is part of that solution. Boyd Orr was a passionate advocate of this and we continue this work today at the Rowett.

“On behalf of everyone at the Rowett I would like to warmly thank Jan and Stephen and all our guests for their support.

“I am proud to say with confidence that the Rowett is well-placed to tackle the challenges of today.”