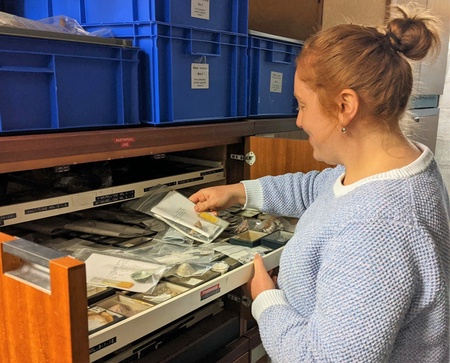 Improved access to one of the University of Aberdeen's nationally significant collections, has been achieved through the year-long 'Marvellous Molluscs Project', reigniting its use for learning and research.

The Mollusc collection, housed in the Zoology Museum, won the Natural Sciences Collections Association’s ‘Bill Pettit Memorial Award’ which supports the conservation, access, and use of natural science collections.

The University’s Zoology Museum has collections ranging from molluscs to mammals and is an important and diverse part of the University’s museum collection which is a Recognised Collection of National Significance.

The project, supported by the NatSCA grant, has also improved the storage of the molluscs to extend the longevity of the collection for future uses.

The collection comprises approximately 2,550, mostly British specimens, collected from the 1840s to the 1970s. The specimens were gifted to the museum by former students, academic staff, and amateur shell collectors, and also include several specimens from as far afield as Madagascar, America, China, Peru, and Jamaica.

“The old storage methods with specimens inside degraded poly bags, labels becoming detached, and shells stored in layers, was causing damage every time the cabinet drawers were opened,” she added.

“The taxonomy was outdated, and they lacked any database records or collections data. This system made specimens hard to locate, and the labels for many of the specimens had become separated.”

Museum staff called on the expertise of staff within the University’s School of Biological Sciences to help them piece together their huge jigsaw of molluscs.

Hannah said: “We were very fortunate to be able to utilise the specialist skills of Dr Kara Layton, Lecturer in Marine Biology, and Eilidh Player, Laboratory Demonstrator, as well as several Post-Graduate Museum Studies students, who offered their knowledge and enthusiasm to the cause.

“We can’t thank them enough for their willingness to share and exchange their extensive knowledge.”

But the project faced a number of hurdles from the Covid-19 pandemic; from limited access to museum stores, to a lack of suppliers for storage display boxes, and a shortage of lorry drivers to deliver the materials required for the project.

“Our time frames may have suffered but we were able to make some wonderful discoveries along the way,” Hannah added.

“These included a specimen of the rare ‘Crusty Nautilus’ Allonautilus scrobiculatus, found in a drawer labelled ‘miscellaneous’ which is now on display with several other interesting mollusc specimens in The Gallery of the Sir Duncan Rice Library until June this year.

“We are now nearing the end of the project and have so far managed to rehouse and update over 600 database records.

“As the project has evolved, it has become increasingly clear that the scale of the task at hand is much larger than we initially anticipated.

“Although most specimens are labelled with original accession numbers which correspond to hard-copy registers, over 70% of the collection does not have a database record.

“Therefore, the rehousing and cataloguing work will need to continue after the initial Project deadline of April 2022. Luckily, we have several keen university students willing to volunteer on the project, and as they say, ‘many hands make light work!’

“The wonderful discoveries that have already been made, have further validated just how important this project is for widening access to future research of this rich and diverse collection. We can’t wait to see what we might uncover next!”