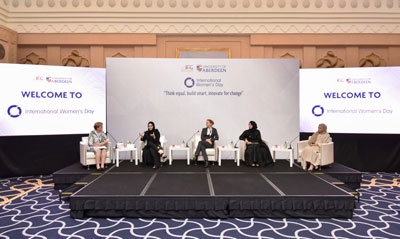 AFG College with the University of Aberdeen marked International Women’s Day with its inaugural Women’s Day conference on March 8, at Sharq Village & Spa.

“I was so inspired by the event last year in Scotland that I decided to hold our own conference. Women’s role in society has always been an area that I’ve been concerned with and followed closely. We in Qatar have been fortunate to have inspirational role models such as Her Highness Sheikha Moza bint Nasser, Chairperson of Qatar Foundation, who has captured the hearts and minds of women of all generations.”

“Being a strong proponent for women, particularly in business and education, I believe that empowerment of women at all levels is fundamental to a healthy and prosperous nation, which is why I am so happy that such an eclectic mix of women have joined us in inaugurating such a wonderful event,” added Sheikha Aisha.

Speakers at the event included Prof Lora Heisler who flew in from the University of Aberdeen, who was recently awarded the Outstanding Scientific Achievement Award from the American Diabetes Association, one of only three women to have been recognized for her research in the association’s 60-year history. Prof Heisler spoke on the ground breaking research she and her team have been undertaking on diabetes prevention and treatment.

Sheikha Alanoud bint Hamad al-Thani, managing director – business development at Qatar Financial Centre, said: “The United Nations has defined the theme for this International Women’s Day as ‘Think equal, build smart, innovate for change.’ The selection of this theme is apt considering the global wave of innovation that is shaping and changing the way we live and function in every part of the world. We must ensure– in Qatar and everywhere else – that the rapid pace of technological development is inclusive and caters adequately for women and girls – not only as consumers, but as designers, creators and leaders of the innovation revolution.”

Qatar Olympic Committee’s director of marketing and communications Sheikha Asma bint Thani al-Thani spoke about her recent expedition to the North Pole, as well as other sporting achievements which included being part of a team that raised QR2.1mn for building schools in Gaza. Ibtihaj al-Ahmadani, Qatar Chamber board member; Sheikha Anwar bint Nawaf al-Thani, CEO of Al Faleh Educational Holding; and Dr Karen Foster, provost of AFG College with the University of Aberdeen, also spoke at the event.