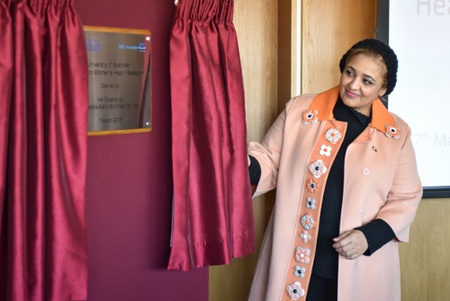 H.E. Dr Sheikha Aisha bint Faleh Al Thani, Chairperson and founder of Al Faleh Group for Educational and Academic Services has been in Aberdeen on an official visit to the city, which included a dinner in her honour, given by the Lord Provost of the city, attended by local dignitaries, council members and senior members of the university management and governing body. During the dinner, the Lord Provost Councillor Barney Crockett and the university Principal Professor Sir Ian Diamond gave speeches welcoming Dr Sheikha Aisha and her delegation to the city. Professor Sir Ian Diamond said “The University of Aberdeen has a close relationship with our city and I was delighted that the lord provost of Aberdeen hosted a special dinner to welcome Sheikha Aisha and it was a privilege for me to speak about the wonderful partnership between AFG and the University of Aberdeen.”

During the opening of the new centre at the university’s Foresterhill Campus on March 7th, Dr Shka Aisha was given a tour of the new world class facilities, which included explanations on the ground-breaking research being undertaken at the centre into a diverse range of areas that will have direct impact on women’s health.

The University of Aberdeen has been at the forefront of women’s health since Professor Sir Dugald Baird was awarded a fellowship of the Royal College of Obstetricians and Gynaecologists in 1935, having championed pioneering research into women’s health, which included the formation of the Aberdeen Maternity and Neonatal Databank.

Dr Shka Aisha said “It has been a real privilege for me to visit this wonderful city and I was delighted to open this innovative Centre For Women’s Health Research. I believe that the important research that will be undertaken here will be of enormous benefit to future medical developments for women and their families, not just in Aberdeen, but globally.”