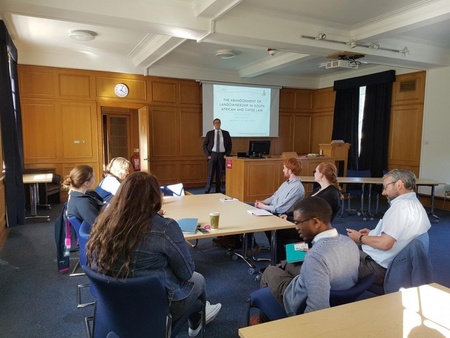 The abandonment of landownership is a subject that has been of little legal and academic concern in most jurisdictions. Besides the seminal articles of Eduardo Peñalver and Lior Strahilevitz there has been relatively little written on the subject. This appears to stem largely from the confusion that arises regarding the suggestion that anyone would wish to abandon what is otherwise a valuable asset. This explains why in some jurisdictions the question has been brought before the courts for the first time only recently, while in others it is an established but rarely exercised practice that is not questioned. It is this usually overlooked topic that has become the subject of my doctoral research as well as a recent article of my own in the South African Law Journal.

It must first be clarified what I mean by the term ‘abandonment’. One may refer to a particular building as abandoned, in the sense that the registered owner has for an extended period shown significant disinterest in his asset, meaning it has stood empty for a prolonged period. In the South African context, however, such a building would likely be unlawfully occupied. This is not what I am referring to when I use the term ‘abandonment’. These properties, despite years of neglect, still have registered owners, and are thus not abandoned in the sense one would talk of abandoning things in the law of property.

Instead, by abandonment, I am talking about a situation in which the owner unilaterally, without the cooperation of a third party, washes his hands of ownership. Where the abandonment is permitted, and depending on the nature of the property in question, the consequences of such vary depending on jurisdiction. Such consequences range from the property being rendered res derelictae and open to appropriation by the first taker, to the property accruing to the ownership of the state.

An example of a well-developed jurisdiction in respect of the abandonment of landownership is Switzerland. Switzerland served as the comparative jurisdiction for my aforementioned article. Abandonment of corporeal property in Swiss law is referred to as Dereliktion. That the Swiss Civil Code (Schweizerisches Zivilgesetzbuch or ZGB for short) permits the abandonment of landownership is accepted by both the courts and legal literature (see Art 666 Abs 1 and Art 964 Abs 1 ZGB). The Swiss model is simple and clear, both in respect of procedure and consequences. The registered owner simply needs to deliver a written waiver to the land registry, following which the relevant entry will be deleted. The consequence is that the land is rendered ownerless, and open to appropriation by the first taker. It is open to individual cantons to modify the consequences of abandonment, for example, by directing the abandoned property into the canton’s ownership.

Last year I was fortunate enough to meet Malcolm Combe of the University of Aberdeen, who has been engaged with the topic of the abandonment of land in Scotland and, as part of this, undertook a research trip to South Africa with the support of the Carnegie Trust for the Universities of Scotland. (A blog about that research trip can be found here.) Malcolm has recently co-authored with Malcolm Rudd an article on abandonment, forthcoming in the Edinburgh Law Review, and intends to write further on the topic. Through my discussions with Malcolm, I settled on Scotland as my final comparative jurisdiction, and conducted a brief research visit to Aberdeen on his invitation, where I held a seminar on my research so far. This visit greatly benefited by doctoral research and I am thoroughly grateful to Malcolm for the opportunity.

But now back to the law itself…

Unlike South Africa, the point had never been raised before the courts in Scotland until this decade, when the Outer and Inner Houses of the Court of Session had to decide the Scottish Coal Company case. There are a few possible reasons for the otherwise anomalous dearth of precedent on the topic in Scots law that Malcolm has identified, including the feudal system of land tenure which prevailed until abolished relatively recently in 2004, as well as new circumstances which lead to land acquiring a negative value.

What makes the Scottish Coal Company case unique, compared with the South African case law, is that the owner (well, the liquidators of the company that owned the land) wished to abandon the land in question. In the few South African cases, a third party asserted that the owner (who was not party to the litigation and whose intention thus had to be inferred from the facts) had abandoned the land in question. In none of these cases did the claim of abandonment succeed, with the courts being unwilling to infer such an intention to abandon on the part of the absent (or not deceased) owner. As a consequence, the courts did not have to grapple with whether the law actually provided a mechanism through which to give effect to the owner’s intention to abandon, should such be established. Thus, despite South African law having case law on the topic dating back to 1979, the single case in Scots law ultimately provides clear answers that South African law lacks.

This decision was overturned by the Inner House on appeal. The court noted that ownership of land is embodied in the written record, which ‘renders the fact of ownership public and, subject to the operation of law, permanent’. As such, the law must provide for the means by which such ownership is brought to an end. There is not, however, any procedure in Scots law through which ownership in land can be transferred ‘into oblivion’. In the absence of such a mechanism provided by law, the abandonment of land is simply not possible.

The Scottish Coal Company case is particularly useful for evaluating the current legal situation regarding the abandonment of landownership in South Africa. One must always be careful when using court decisions from another jurisdictions to draw conclusions about one’s own law. Nevertheless, the decision in the Scottish Coal Company case supports the interpretation of the legal position in South Africa put forward by Professor Hanri Mostert  and expanded upon by myself in my recent article in the South African Law Journal. That is, publicity in respect of land is served through registration actions, subject to exceptions in the context of original acquisition of ownership. In the absence of a mechanism provided by the relevant legislation (the Deeds Registries Act) to change the position in the Deeds Registry, the principle of publicity is not given effect to. As such, the abandonment of landownership is not possible.

What is key in all three jurisdictions I have surveyed is that the principle of publicity appears to underpin the possibility of abandoning landownership. The law must provide a mechanism through which abandonment can be effected in the relevant land register. In the absence of legislation and established practice, abandonment of land does not appear possible. The Inner House in the Scottish Coal Company case regarding the position in Scots law stated that ownership in land is embodied in the written record, and in the absence of a mechanism provided by law to change the written record, it is permanent. The law simply does not provide for abandonment of land, thus it is not possible. In South Africa, no court has had to engage with the question as to whether it is permissible to abandon landownership, but in line with Mostert’s observations, it does not appear possible to abandon in the absence of a mechanism provided by the Deeds Registries Act (see however the opposing view of Professor JC Sonnekus). Swiss law, however, permits the unilateral abandonment of landownership, which is achieved solely through actions in the relevant land register. Scrutinising the owner’s intention is thus not relevant in Swiss law at all, so long as this basic requirement is met.

The abandonment of landownership – whether it is possible and under what circumstances – appears to be a very contextual matter. In some societies, there is simply no reason to restrain owners from abandoning land where they find the concomitant obligations excessive. There are no serious societal costs which demand such restrictions. Switzerland is a clear example. Other societies, where there has been a proliferation of properties that have a negative value, prohibition or a regulated exit from ownership appear preferable, although it would be ideal if the law made the position more clear (particularly in South Africa). What is evident is that there is no one-size-fits-all approach.

South African and Scots law appear similarly positioned with respect to the abandonment of landownership. The law simply does not permit such abandonment, as a result of the absence of an express mechanism facilitating such. However, what now needs to be addressed is whether the prevailing legal position is satisfactory. Should the law remain as is or should it be reformed to allow abandonment in circumscribed circumstances? The markedly different socio-economic circumstances of South Africa and Scotland will no doubt lead to disparate answers in each jurisdiction.

Richard Cramer is a researcher and a PhD student at the South African Research Chair: Mineral Law in Africa at the University of Cape Town (@mlia_uct). The financial support of the National Research Foundation of South Africa is gratefully acknowledged. The views expressed in this article are those of the author and should not be attributed to any of these institutions.