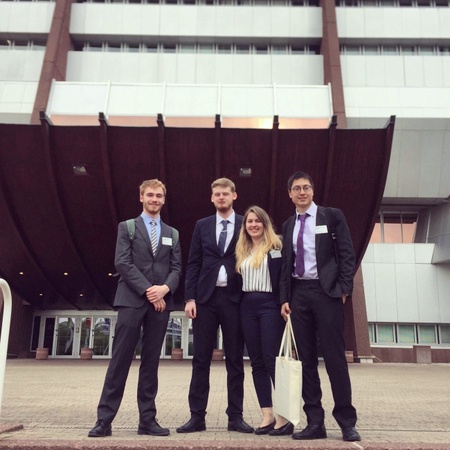 As we reflected on our time at the University of Aberdeen, we came to a conclusion that participation in an international moot court competition would be one of the most memorable experiences of our lives. In a moot, students assume the role of lawyers and present written and potentially oral arguments to a court. The arguments revolve around a hypothetical fact pattern and the subject matter is often focussed on international law issues.

This year, we chose to participate in the European Human Rights Moot Court Competition, where the case was focussed on a balance between the right to freedom of religion and mandatory vaccinations. It was a magnificent experience. We were enthralled by the atmosphere and the networking of the professionals of the human rights community during the Final Round in Strasbourg, where we met and befriended some of the brightest and most ambitious law students in Europe. However, it is often the smallest moments of participating in the competition that we look back on most fondly. In this article, we hope to share some of the highlights and struggles that we experienced in this incredible journey.

We believe that the whole team would agree that the most arduous part was coming up with the arguments for both sides of the case and writing them in the form of the official submissions. Although two of our team members already had some experience of human rights, the level of detail that the case required was something that no one imagined. Working closely together allowed us to see different sides of our teammates that we would not otherwise have seen in a typical classroom environment. All that said, this long and demanding journey was made more bearable with our hope to qualify to the Final Round of the Competition and the opportunity to argue in the European Court of Human Rights, something we never thought would be possible.

Due to the standard of the competition, we put the idea of qualification to the back of our minds only to be stunned when we saw our team number among the twenty that had been selected to participate in Strasbourg. Going back to our notes and research felt like reading something alien, yet we managed to catch up and further develop our arguments. For a month we did nothing but think of the case and, before we knew it, it was time to depart to Strasbourg.

The competition opened with a reception at the Permanent Representation of Ukraine, where we had a chance to meet our competitors and have a glass of wine. The stressful atmosphere was inescapable and shortly after everyone proceeded to their rooms to study till the early hours of the morning.

The next day marked the start of the preliminary rounds. In our first round, we managed to succeed, winning apparently quite convincingly, due to our unique arguments, which were more focussed on our medical research than the law itself. Our second moot was in front of tougher judges, yet we gave a very robust performance, and every member can be proud of how they presented themselves. Although each member only spoke for around 15-20 minutes, it was a culmination of all our months of work and preparation.

As we later found out, for many teams, participation in this competition was a way of obtaining university credits. For us, it was simply an extracurricular activity. Therefore, we were all proud of the work we put into this competition. Ultimately, we did not proceed to the semi-finals, but we must have come close. Harry Johnston was awarded the Best Orator of the Preliminary Rounds, which was determined by the score of each individual orator.  Apart from it being a recognition for the amount of work that Harry put into the competition, it was also a recognition of the team’s collective preparation. The pre-emptive thinking and preparation by all team members, including the captain Diana Passinke and the team coach Lucas Fischer, about all the possible questions and arguments that Harry could be faced with, gave him the necessary tools to advocate as effectively as he did. Therefore, we believe that each member of the team is equally deserving of that award. We hope that our experience will be a motivation for all the law students to engage in this kind of competitions. Although due to the timing of the competition, we cannot graduate with the rest of our class, this experience was definitely worth it and the whole competition was truly remarkable.

Written by Diana Passinke and Harry Johnston. Other members of the team were Lucas Fischer, Thomas Mackie and Benjamin Jones. (Benjamin is not featured in the photograph: appearing in the photo (from left to right) are Thomas, Harry, Diana and Lucas.)