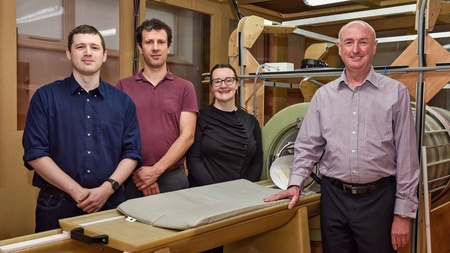 The University of Aberdeen's world-first fully operational Field Cycling Imaging scanner and suite has received a generous grant from the Wolfson Foundation.

The grant of up to £723,000, generated by the University of Aberdeen Development Trust, will support the creation of a new patient-focussed version of the Field-Cycling (formerly Fast Field-Cycling MRI) scanner in a newly refurbished imaging suite within Aberdeen Royal Infirmary.

Field-Cycling Imaging (FCI) is a new technology that can produce detailed images of the inside of the body. It can be used to detect effects of diseases and other issues that are otherwise invisible to the likes of MRI and may appear earlier than what is currently detectable.

The University of Aberdeen facility within Aberdeen Royal Infirmary is scheduled to be completed in 2023.

FCI has been developed during the last 15 years at the University of Aberdeen, where the world’s first full-body MRI scanner was built in 1980. The FCI project received a 6.6 million Euro EU Horizon 2020 research grant in 2016.

Described as being ‘like 100 MRI scanners in one’, FCI is the first of its type in the world and will be able to reveal completely new information about diseases including osteoarthritis, cancer and stroke.

A fully functioning prototype was developed by the medical physicists at the University of Aberdeen and has already been successfully used to scan patients and healthy volunteers.

We are very grateful to the Wolfson Foundation for this grant which will support the creation of this world's first hospital-based FCI scanner and imaging suite." Dr Lionel Broche

The next incarnation of the scanner will be built inside the new facility, which will be known as the Hall Family Imaging Suite – generously supported by the Mary Jamieson Hall & John F. Hall Trust – within Aberdeen Royal Infirmary.

Thanks to its location at the heart of the region’s main teaching hospital, the new imaging suite will allow the research team to scan many more patients using the ground-breaking scanner.

Dr Lionel Broche, Hall Family Lecturer in Medical Physics at the University of Aberdeen and academic lead on the FCI project, said: “We are very grateful to the Wolfson Foundation for this grant which will support the creation of this world’s first hospital-based FCI scanner and imaging suite.

“This next stage is crucial as it will allow us to scan a much wider range of patients than before due to its location in the hospital. This will help us to determine what extra diagnostic information is provided by FCI technology and how it can be used in the future to aid diagnosis.”

Paul Ramsbottom, chief executive of the Wolfson Foundation said: “Early and reliable detection remains critical to how so many diseases are treated – and the success of that treatment. We were very impressed by the track record of research into imaging technology at Aberdeen.

“This prototype scanner has the potential to transform medical imaging and in turn improve outcomes for patients.”

Professor David Lurie, leader of the FCI project until his retirement in October 2021, added: “It is wonderful to see that the FCI project is progressing at full pace, bolstered by the substantial grant from the Wolfson Foundation, after more than 15 years of research by the team.

“I am greatly looking forward to continuing my involvement with the project, in my new role as Emeritus Professor at the University.”