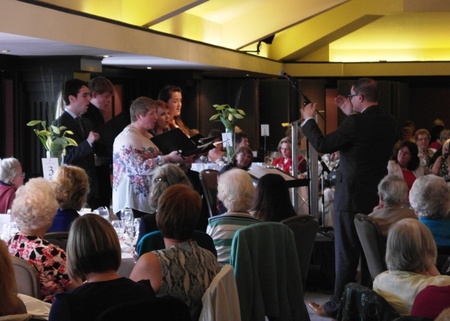 Over 300 guests gathered at The Marcliffe at Pitfodels on Thursday 12 September to enjoy a Bucks Fizz reception, lunch, a presentation and musical performances to raise £6,000 for 12 Chapel Choir scholars in the University of Aberdeen music department.

The event was hosted by Professor Neva Haites, Vice Principal for Development, and generously supported by The Marcliffe at Pitfodels. Professor in Composition Paul Mealor was guest speaker and he also conducted a number of students from the music department in two performances of his compositions along with an encore. The funds from the event were raised by ticket sales and a raffle which was supported by many of the individuals and companies attending the event.

Professor Mealor, a lecturer at the University of Aberdeen, was catapulted to international fame in April 2011, when 2.5 billion people - the largest audience in broadcasting history - heard his composition, Ubi caritas, performed by the choirs of Westminster Abbey and Her Majesty’s Chapel Royal at the Royal Wedding ceremony of His Royal Highness Prince William and Catherine Middleton, now TRH The Duke & Duchess of Cambridge. The piece received excellent reviews from the world’s media and topped the classical singles charts in the USA, UK, Australia, France and New Zealand. His composition “Wherever You Are”, performed by Gareth Malone’s Military Wives Choir, was released in December 2011 and entered the UK singles chart at number 1, also claiming the status of the biggest first week sales since 2006. He has since gone on to compose Sleep On, a lullaby especially for Prince George which was one of the pieces sang by the students at the lunch.

The 12 successful scholars have each received £500 to assist them with their studies. Each one is a member of the King’s College Chapel Choir and will participate in its services and concerts throughout the year.

University of Aberdeen Development Trust Director Liz Bowie stated “We are absolutely delighted with the success of this year’s event and would like to thank everybody who attended as well as Paul for his inspirational presentation, the students for their beautiful performance, The Marcliffe at Pitfodels for their support and all the raffle donors. All the monies raised has been used to support 12 exceptionally talented music students with their studies.”

The Development Trust is an independent charity registered in Scotland which raises essential funds to support much of the University’s activities such as vital medical research as well as supporting students through the provision of scholarships, bursaries and facilities and preserving the University’s rich heritage. Funding from our worldwide family of alumni, individuals, companies, organisations and the community is essential to enable a wide range of activities.