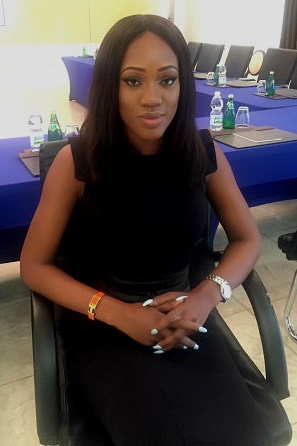 We have so many graduates around the world doing wonderful things. Here's a brief round-up of some of our alumni's achievements from the last few months.

Adaku Ufere, who graduated from the University of Aberdeen in 2012 with an LLM in Oil and Gas Law, was recently honoured at the “Nigerian Rising Stars – 40 Leading Nigerian Lawyers Under 40” ceremony, hosted by ESQ Nigerian Legal Awards. On top of being named Head of the Energy Practice at her firm, Centurion Law Group, it's been a wonderfully successful year for Adaku! Of her time at the University she says "I gained extensive theoretical experience in the energy sector... I had a wonderful teacher, Professor John Paterson, who really opened my eyes to how fascinating and useful the legal technicalities of the energy industry are."

You can read a very interesting in-depth interview with Adaku here.

NHS Highland has appointed Ros Philip to be its new head of finance for north and west Highland. Originally from Inverness, Ros graduated from the University of Aberdeen in 2001 with a joint honours degree in accountancy and economics. After three years as an accountant with oil service company Halliburton, she qualified as a chartered management accountant as part of their graduate rotation scheme. Ros subsequently worked for Johnson and Johnson for five years prior to working with CHC Helicopters in Aberdeen and later joining FirstGroup.

You can find more info on her appointment here.

Gordon Park, 22, achieved a joint degree in History and Film Studies and has won the perfect role to combine the two disciplines. He has been appointed by iMetafilm, a Glasgow-based company that digitises old film footage, to operate its innovative technology. The highly skilled job is unique to iMetafilm, which has developed patented equipment to preserve cinematic history. The process involves taking multiple photos of each film frame and converting them into digital output, providing a cost-effective way to save and store the content recorded in archive film. Gordon will be scanning and digitising archive film from international clients including the US Library of Congress, the Cuban Institute of Cinematographic Art, the University of Edinburgh and the University of Glasgow.

Gordon said: “It is a real privilege to become one of the world’s first metascanners. Studying film at university requires covering a lot of theory. I wanted to find a job that was more hands-on, which would make a difference – and I have. It is fantastic to be part of a team that is providing a service of such historical and cultural significance. Films that have been put in storage are still continuing to degrade. They are in danger of being lost unless they are digitised.”

Following its successful entry into the U.S. market, and recent business wins including Kraft, JT has appointed an Aberdeen graduate with a Bachelor of Science (First Class) in Geology & Mineralogy as the Senior Vice President of JT Americas. Craig Samuel, who graduated in 1988, has held high level executive roles within a number of UK and US businesses including; Wearality Corporation, Los Altos, CA; Unisys Corporation Inc.; Compaq Corporation; Hewlett Packard Worldwide; UT Starcom; and British Petroleum Group (Alaska) and now takes responsibility for the consolidation of JT’s delivery of innovative wholesale products and services to its existing American customer base.

Award-winning author Shona Maclean, who has an MA and a PHD in History from the University of Aberdeen, chose a bookshop in Dingwall to launch her new book The Black Friar. A follow-up to The Seeker, which won last year's Crime Writers' Association Historical Dagger award, Shona chose Dingwall for the launch rather than London because she is a regular customer at the shop. She gave a talk at the event, which was also part of the nationwide campaign Books Are My Bag day which aims to support independent bookshops.

You can find some reviews of the book here, where it currently rates at an impressive average of 4.53 out of 5 after 40 ratings.

At the age of 86 not many people are undertaking new professional roles, but University of Aberdeen alumnus Professor George Pollock has recently been appointed a Visiting Professor in International Public Health by Staffordshire University and been handed teaching duties on their international Master of Public Health course for distance learners. The appointment lasts for three years in the first instance. Professor Pollock, who graduated with an MBChB in Medicine in 1953, was previously an Honorary Senior Research Fellow at the Department of Public Health and Epidemiology at the University of Birmingham and has undertaken a wealth of academic research that has taken him all over the world. He is also an elected member of the Council of the Birmingham Medical Institute.

Accredited employment lawyer and graduate of Aberdeen University, Nicola Gray, has been promoted to Partner at legal services firm Mackinnons. Nicola graduated with a Diploma in Professional Legal Practice in 2007. Mackinnons Partner Graham Jones said that "Nicola's appointment underlines our commitment to servicing our clients' employment needs and rewards her hard work in delivering effective solutions. She is a valued member of the Mackinnons team and brings many additional qualities to the Partnership."

Erika Grant, who graduated from the University with an LLB degree and postgraduate Diploma in Professional Legal Practice, was awarded first place in the Social Enterprise category of the Converge Challenge. In collaboration with Firstport, the Social Enterprise category focused on ideas that will have a positive impact on social and environmental issues. Erika won the award for her initiative Project Turnkey.

Erika said: “I am absolutely delighted that the judges selected Project TurnKey as their winner in the Social Enterprise category. Winning the award now gives us the exciting opportunity to trial our programme in other cities in Scotland. Project TurnKey aims to empower people who wish to exit prostitution with the information, confidence and skills to change their lives."

You can read more about the project here.

Elia Riboni Verri, originally from Italy, studied his Biomedical Sciences degree at The University of Aberdeen and graduated with first class honours this summer. Shortly after receiving his qualification, Elia started a ScotGrad placement at Sirakoss - a science company who develop synthetic bone grafts. Working within the business side of the company, Elia gained insight into where a science degree can lead graduates.

The Rev. Eliza Armstrong, a double graduate of Theology and Religious Studies at the University of Aberdeen and formerly the minister at Woodside Parish Church and Greenock East United Reformed Church, has had her first book, Where Is Tomorrow?, published by Xlibris. The book is about death and coping with loss and was adapted from the 5000-word dissertation she wrote as part of her Master of Theology degree course.

You can find more about the book here. It can be bought online at Amazon.co.uk in paperback, hardback or e-book and will be available to buy in shops in the near future.