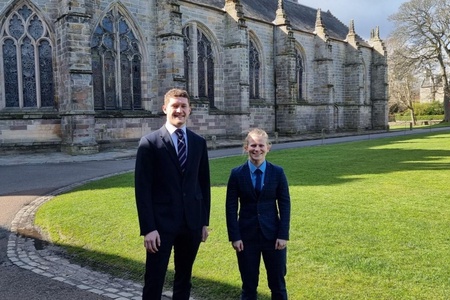 The University of Aberdeen has retained the top title in a national competition that sees the cream of Scotland's student legal talent go head to head in a negotiation showdown.

Law students Andrew MacFarlane and Amber Rose Love, both 22 and from Aberdeen, battled it out against teams from Edinburgh, Glasgow and Strathclyde Universities recently to win the National Negotiation Competition.

The competition is the oldest and most renowned inter-university competition, focusing on legal negotiation for law students from all over the world. It is the second year running that the University’s Law School has won the competition, with the team now going on to represent Scotland at the International Negotiation Competition in Nebraska in June.

The pair, who are studying the Diploma in Professional Legal Practice (DPLP), were tasked with conducting mock negotiation exercises relating to cases involving a marketing and entertainment business.

“The competition is a great way to test myself and the skills I have developed throughout both my education and life generally,“ said Andrew. “It is also an exciting opportunity to represent the University.

“I believed we had prepped thoroughly and had a good understanding of the task at hand, although there was a certain level of apprehension as to how well-prepared other teams would be and how we, and they, would perform on the day. Winning is a great achievement, and one we can both be proud of.”

It feels fantastic to have won the national finals and to be able to go on and represent Scotland. I hope we can do as well as last year's team who finished third in the internationals." Amber Rose Love, Diploma in Professional Legal Practice student

The team, including reserve member Maria Naneva who is also a Diploma student, were coached by DPLP tutor and partner at law firm Laurie & Co, Linda Fyffe.

“Before the competition, I felt terribly nervous,” said Amber. “However, once we completed the first negotiation I felt I was able to relax more and enjoy the process of the competition. Andrew had prepared incredibly well and provided us with several documents that we used throughout the negotiation, I think this level of preparedness helped us to secure the win.

“It feels fantastic to have won the national finals and to be able to go on and represent Scotland. I hope we can do as well as last year's team who finished third in the internationals. I'm not too sure who we will be competing against, but it will be great to get to meet people from around the world involved in the legal industry.

“My friends and family were really happy to hear about our win and I can't wait to get to work with Andrew and Maria for the next part of the competition. The whole team works really well together and that is something that will really help us going forward.

“Andrew and myself both play rugby for the university teams as well as local clubs Aberdeen Grammar Men and Garioch Ladies respectively. I like to think that helps with our teamwork skills!”

The judging panel for the Scottish final was made up of professionals from across the legal profession, included Adam Davies of Kirkland & Ellis LLP, Elaine Farquharson-Black of Brodies LLP, Graeme Napier of Aberdeen Sheriff Court, Fiona Barker of Andersonbain LLP, Roger Connon of Pinsent Masons LLP and Donna McKenzie Skene of the University of Aberdeen.