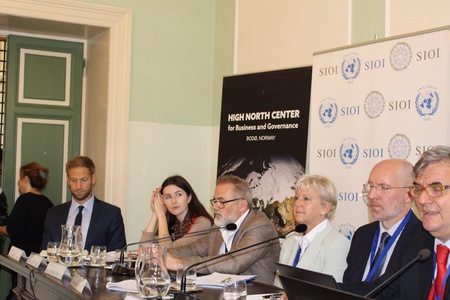 This week I had the pleasure of participating in an international symposium ‘Arctic Connections’, hosted by the Italian Society for International Organisation, in Rome. My talk, on the new Scotland’s Arctic policy, is summarised in this blog post.

On 23 September 2019, Scotland launched its Arctic policy, ‘Arctic Connections: Scotland’s Arctic Policy Framework’. The document is distinct from the UK-wide Arctic policy document, updated in 2018. This important step raises questions of not just the participation of non-Arctic States in the Arctic governance, but also the meaning of adoption of an Arctic policy and its interpretation in a wider geopolitical context.

Scotland’s development of its own separate Arctic policy is not entirely unpredictable. Johnstone discussed the possibility of Scottish Arctic policy back in 2012 (see also Cruse 2016). She emphasised the close geographic proximity, cultural connections, and potential cooperation in maritime activities between Scotland and the Arctic. In October 2016, First Minister Sturgeon addressed the 2016 Arctic Circle Assembly in Reykjavik, laying international foundation to Scottish interests in the Arctic. The Scottish Government has since consistently expressed its interest in the Arctic, In November 2017, the Government hosted an Arctic Circle Forum in Edinburgh, where ambitions to develop its own Arctic Strategy were announced. In October 2018, Culture, Tourism and External Affairs Fiona Hyslop delivered a speech on Scotland: A New Arctic Strategy at the 2018 Arctic Circle Assembly in Reykjavik, outlining priorities of the upcoming policy document. It is also not uncommon for regional or non-State actors to adopt their own Arctic policy documents, as did the Faroe Islands, European Union, and Inuit Circumpolar Council.

Scotland adopting its separate Arctic policy is also not provocative or illegitimate. Scotland’s political status of a devolved constituency, as such, does not prevent it from formulating an Arctic policy, only the scope which such policy can cover. Under the Scotland Acts 1998 and, more recently, 2016, competence to formulate policy on defence, foreign affairs and trade, is reserved to the Westminster. Devolved powers of the Scottish government include education, environment, tourism and economic development. This separation is evident from Scotland’s Arctic Policy Framework.

Scotland’s Arctic dedicates substantial length to establishing a close connection between Scotland and the Arctic, going back to the Nordic heritage of place names, polar exploration and citing current links between Scotland and the Arctic through the European Union, migration, and research. The Policy Framework adopts the now-ubiquitous term of ‘near-Arctic State’ devised by the Chinese Arctic policy, but emphasises close proximity and calls Scotland a ‘European Gateway to the Arctic’.

The contents of the document reflect the limitations of the devolution. While the UK’s policy emphasises its role as an Observer in the Arctic Council, the ‘vision of Global Britain’, UK Arctic research, and deals with inter alia defence and safety; the focus in the Scottish document is very much on  cooperation in education, culture, research, climate change, rural connections, and maritime activities, such as renewable energy and decommissioning. Scotland’s experiences in community-based grids and low carbon energy development in remote areas would be of particular relevance in the Arctic context, where many off-grid communities still rely on diesel for heating and electricity. At the same time, the policy acknowledges the importance of oil and gas development for low carbon energy transition ‘in terms of transferable skills and infrastructure’.  There are also some associated economic opportunities for Scotland in Arctic resource development – the Policy promotes Scotland’s credentials as a ‘key near-Arctic marine transport and logistics partner, scoping opportunities to build a world-class hub’.

The policy concludes with Scotland’s Offer to the Arctic: to establish an Arctic Unit within the Scottish Government’s Directorate for External Affairs (following Johnstone’s 2012 advice); and to create a fund to support projects and activities promoted by third sector and community-based organisations that raise awareness of Scottish-Arctic links and create new opportunities for international collaboration with the Arctic.

And what about Brexit?

The Scottish policy document does not acknowledge the UK’s status as the Observer, nor does it mention the UK-wide Arctic policy. In this context, it is important to note, that during the formulation of the UK’s Arctic policy, Scotland was reportedly ‘snubbed’ from the process. Instead, it expresses concern over the UK’s exit from the European Union, and the potential risk to Scotland’s international partnerships, including with Arctic countries. It states: ‘We are determined to protect Scotland’s reputation as an open and outward looking-nation and we are re-doubling our efforts at promoting Scotland as a good global citizen’. The timing of the policy in the Brexit context is peculiar, but as discussed above, Scotland is pursuing legitimate interests in adopting its Arctic policy, and it would be difficult to attribute it solely to Brexit and gathering support for another independence referendum.

The scope of Scotland’s Arctic Policy Framework is consistent with its devolved powers and for what it’s worth, the Arctic and European partners welcome this development. EU Ambassador at Large for the Arctic spoke at the event and expressed her support for this policy and commended the extent to which the Scottish Government outlined the potential avenues for fruitful cooperation.

For more analysis on Scottish Arctic policy and connections between Scotland and the Arctic see:

Polar Research and Policy Initiative are running a 10-part series on Scotland and the Arctic.