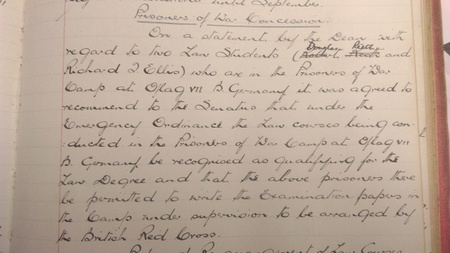 The first post on this site was published in October, looking at some compelling minutes documenting the lead-up to the Second World War. It is rare to describe dusty old minutes as compelling, but these really were, narrating as they did a Dutch law faculty seeking support as continental Europe was facing up to what seem unimaginable horrors today. I added a further word or two over at my own “basedrones” blog (another WordPress site, which I have maintained for over three years). In passing, I mentioned something about two of our students – Douglas Reith and Richard (Dick) Ellis – sitting exams whilst they were prisoners of war in Bavaria, after they were caught up in the madness that the University of Amsterdam had warned of which had since spiralled into war.

I did half-wonder about writing a little bit more about this story, but decided to leave it for another day. I was then contacted by Paris Gourtsoyannis, a journalist from The Times, who clearly has a better eye for a good story than I do. With my blessing, he ran with the story himself and managed to track down the son of Douglas Reith. This is all detailed in his article of 10 November (£). From that, one thing led to another and I found myself on BBC Radio Scotland’s Newsdrive, chatting about the situation the students found themselves in whilst in Oflag VIIB (for which I very much relied on Paris’s legwork) and discussing what I could in terms of the minutes and our own graduation records. (The Newsdrive “listen again” function is available for another two days from the date of publication of this blog.)

The minutes do provide a bit more information about Douglas Reith, as follows:

The Edmund Prize is still awarded today. I think I speak for the whole School of Law at the University of Aberdeen when I say that that continuity and history is something we are proud of, but it does proved a stark comparator for our current students. Not that I want to downplay any achievements of our current students, of course, but any future recipient of that prize might just ponder what hardships this predecessor endured before graduation.

It may be there are further intriguing matters covered in the minutes. If there are, you will be able to read about them here. Meanwhile, I commend the article in The Times to you.