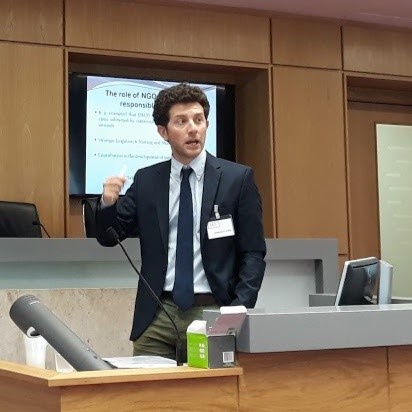 It was not a good start to the New Year for the British third-sector. So far, things have not been very promising and 2018 seems to be a turbulent year for British charities. The nomination of Baroness Tine Stowell as new Chair of the Charity Commission has spread concerns within components of organised civil society over the lack of a politically-neutral appointment due to her longstanding parliamentary carrier as a member of the Conservative party. The former minister for civil society Rob Wilson has, in turn, openly criticised charities of being overtly pro-left, warning about the current process of ‘Corbynisation’ of the third-sector. More dramatically, an investigation carried out by the Financial Times revealed that hostesses were groped, sexually harassed and propositioned during a men-only fundraising dinner organised by the London-based charity the Presidents Club. With this preamble, the recent scandal involving Oxfam’s misconduct in Haiti has not only worsened the reputation of NGOs but it also highlighted the failure of policies implemented by charities to deal with financial transparency, prevention of abuses perpetrated by staff members and protection of the communities charities provide services to.

For those who missed the news, The Times revealed that senior Oxfam staff in Haiti had paid earthquake survivors for sex in 2011, citing a confidential report of Oxfam in which there is reference to a blameful “culture of impunity” spread among aid workers. According to the newspaper, Oxfam did not tell other aid agencies about the misconduct of staff members, which allowed them to work elsewhere, and, similarly, it failed to report the abuse to the Haitian authorities.
The scandal had an immediate impact on the various stakeholders to whom Oxfam should report its actions. Essentially, the media account of the scandal triggered the reaction of many stakeholders who are contributing, to different extents, to the accountability narrative of this story. As shown below, Oxfam is currently facing a multiple-accountability demand.

By exercising its function of taking enforcement actions in case of charity malpractice, the Charity Commission has opened a statutory inquiry into Oxfam as the latter “may not have fully and frankly disclosed material details about the allegations at the time in 2011, its handling of the incidents since, and the impact that these have both had on public trust and confidence”. Among the various external stakeholders, charity regulators hold associations accountable by exercising supervisory and investigative functions aimed at verifying compliance with charity law as well as by investigating wrongdoing within the sector. Institutional watchdogs and regulatory bodies exercise a significant degree of accountability over charities by granting/revoking charity status and by issuing disciplinary sanctions in cases of misconduct.

Just like regulatory bodies, donors exercise considerable leverage of accountability in light of their financial power. In general, big donors tend to shape the way in which projects are implemented on the ground by withdrawing funding if their expectations are not met. It is also empirically proven that scandals involving charities lead cyclically to low-stakeholder trust which, in turn, causes a decrease of donations. Indeed, the BBC has reported that more than 1.200 private donors cancelled their direct debits three days after the Oxfam’s investigation was published by The Times. Marks & Spencer - a £16m donor for Oxfam since 2008 - will soon decide on withdrawing financial support while the Duke of Edinburgh’s Award is considering whether it should allow children to volunteer in Oxfam shops (per this report in The Times). Voluntary work is vitally important for a charity and any loss in that respect would negatively impact a charity’s financial health. As to institutional donors, Oxfam could potentially lose £29m of European funding, and last year it received £31.7m in Government funding, which has also been put seriously at risk. Additionally, actress Minnie Driver has stood down from her role as a celebrity ambassador for Oxfam.

Charities can be also held accountable, at sectoral level, by their peers. Peer pressure is often exercised, especially in the aftermath of a scandal, to condemn negligent organisational behaviour. Public scandals can be such to affect the credibility of the sector even if allegations of misconduct concern a small number or even just one organisation. Therefore, peer accountability is strategically important to preserve and restore, in the long term, the reputation of the sector. In this specific instance, BOND – the umbrella body for international aid NGOs– condemned in peremptory terms the behaviour of Oxfam employees, whereas, the National Council for Voluntary Organisations (NCVO) has emphasised that “more can and must be done” to minimise the risk of abuse taking place. Contextually, ChristianAid said it had investigated two sexual misconduct cases last year: “one investigation led to the dismissal of a staff member, while the other case resulted in disciplinary action.” In a similar vein, ActionAid has stressed out its zero-tolerance policy on any form of sexual harassment. The Scottish aid charity the Scottish Catholic International Aid Fund has also insisted it can be trusted, after it acknowledged two instances in Africa which involved a volunteer from a local partner organisation and a junior staff member respectively.

There is an internal dimension of the accountability debate that takes place at organisational level among those people involved in the charity governance and administration. The idea is that charities learn from their mistakes and implement organisational changes to improve their accountability performance. So far, two things have happened at an organisational level. Firstly, Oxfam’s deputy chief executive resigned and took full responsibility for the wrongdoing, pointing out that Oxfam failed to adequately act upon concerns that had been raised. Secondly, it announced a package of measures to improve safeguards and organisational performance, including: a) staff induction and mandatory training to ensure staff learn more about organisational values and code of conduct; b) establishment of a new, independent, external whistleblowing helpline for staff members; c) strengthening the vetting and recruitment of staff; d) a commitment to work with the rest of the sector to overcome legal difficulties which have prevented from sharing intelligence among NGOs.

Aside from the organisational dimension of accountability, there is also the potential criminal liability that rests with those individuals who allegedly perpetrated the abuse. To date, no criminal investigation has been launched and in theory, as a matter of territorial jurisdiction, sexual abuse should be prosecuted by Haitian authorities. However, Andrew MacLeod (former chief of operations of the UN Emergency Coordination Centre) has clarified that: “if they [victims] were adults, perpetrators should be charged in front of the courts in Haiti because prostitution is illegal. If they are children, they should be charged in front of UK courts for breaking international sex tourism laws”. The UK International Development Secretary is to meet the National Crime Agency over the Oxfam scandal.

Concluding remarks: part of the problem or the whole problem?

Oxfam is facing overlapping demands of accountability formulated by different stakeholders, each of which is exercising a pressure upon and within the organisation: donors, regulators, media, umbrella bodies, peers, volunteers, and Oxfam’s employees and managers. The accountability narrative would be completed if the views of the victims are taken into account: those people on whose behalf Oxfam claim to be working with and for. The reference here is to Oxfam’s beneficiaries, who represent the most important source of organisational legitimacy. The Haiti scandal is dramatic for many aspects but there is a fundamental matter that the sector needs to address urgently: if NGOs are failing to protect communities they work with from harm and abuse, can we seriously believe that charities are contributing to the empowerment of these communities? According to UN figures (from 2017), 2.5 million Haitians are still dependent on humanitarian aid and there are tens of thousands of Haitians living in temporary shelters eight years after the earthquake. From this perspective, NGOs are part of the problem rather than the solution. The Haiti scandal, however, revealed something more insidious that goes well-beyond the lack of financial transparency and poor-organisational performance in terms of service delivery: the benevolent protector transformed into a sexual abuser. In such a case, the Oxfam staff in Haiti were not simply part of the problem but, rather, they became the problem.