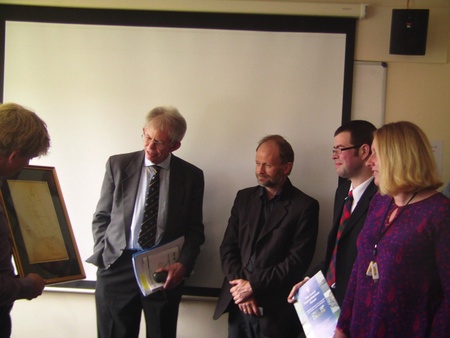 On 6 and 7 March 2015 I was lucky enough to participate in a conference celebrating the life and work of Professor David L. Carey Miller at the University of Aberdeen. David was both a wonderful scholar and a wonderful man, and his conference and the related dinner was befittingly well attended. When “DCM” spoke at that dinner, it was with his usual modesty. Delegates listened to his downplayed anecdotes about his remarkable career, whilst his younger colleagues – and perhaps even not so young colleagues – reflected on his record of publications and achievements with a mixture of awe, envy and pride.

Whilst David’s career was worthy of celebration in and of itself, another point of the conference was to showcase new ideas. The various papers from that conference are slowly being drawn together to form a “festschrift” for David. That process of bringing together a collection of essays to celebrate his contribution to Scots law and – given David’s fluency in a number of legal systems – his native South Africa and indeed further afield has perhaps taken a little longer than it might have, mainly because some contributors have been tardy in submitting developed versions of their conference papers. (The present writer included.) It is now to my eternal regret that David will not see the published version of that festschrift, or even a draft version of the words I planned to submit to it. Nor will he read the words in this crudely and hastily shunted together blog post. That is because David died suddenly at the weekend. His death leaves a void in the community in which he had been based for many years.

What follows is a short, personal reflection of what David meant to me. I am conscious of the dangers of making a piece about someone else all about me, but I am confident my own interaction with David will go some way to demonstrating the kind of man he was. No doubt others will have similar stories. (If so, please feel free to comment below or get in touch by any other means.)

Despite our respective connections to Aberdeen, I first met David in Glasgow, at the University of Strathclyde. That place of useful learning played host to the 2005 Society of Legal Scholars conference. David was a delegate at that event, whereas I had just finished my law degree and was one of a number of students (and recently ex-students) who acted as guides. On the basis that I was about to move to the University of Aberdeen to study the Diploma in Legal Practice (as the postgraduate phase of legal education in Scotland was called at the time), I was able to speak to David and strike up the beginnings of a relationship that resulted in me being both a research student and a tutor for the School of Law whilst working towards my postgraduate diploma. The fact that David was Head of School during that year no doubt helped with those appointments, but the most important factor in all of this was his taking the time to speak to and encourage a young whippersnapper when he had absolutely no obligation to do so.

Some of my research in my Diploma year was independent, but the most significant works were produced in partnership with David. This collaboration came to fruition in the form of two pieces of work: one on the boundaries of property law; and another on one of David’s specialist subjects, corporeal moveable property (co-authored by Andrew Steven and Scott Wortley). David’s contribution to my own development was immeasurable, both in terms of guidance and in his willingness to list me as an equally-ranked co-author. I can think of several others who similarly benefited from his benevolence towards more junior partners.

After completing my Diploma, I moved to Edinburgh to train then practise as a solicitor, but David fostered a continued link between me and Old Aberdeen. I taught an honours LLB seminar and participated in the Baltimore/Maryland Summer School, both at the invitation of David. (David’s enthusiasm for and dedication to that Summer School is something else worthy of celebration.) I rejoined the School of Law as a lecturer in 2011, a step made all the simpler by that ongoing relationship, then continued to work with David on an eclectic range of matters: teaching for the undergraduate property law course; submitting a response to the Scottish Law Commission on the reform of security for corporeal moveables; and presenting to a delegation of Norwegian judges about aspects of Scottish land law.

It is the first of those activities which brings me to my most personal insight into David, but it is one which also gives a great insight into him as a man.

On 20 August 2013 the summer diet of exams at the University of Aberdeen was in full flow. A number of students were tackling the Law of Property exam that David, me and others had set. With apologies to those students, I am afraid your travails are not important to this anecdote. The more noteworthy travails were mine. To put it mildly, I was not at my best that day. I was finding exam invigilation to be nigh on the most difficult thing I had ever done: for context, I was no longer able to walk the relatively short distance from my home to the university, my breathlessness and groin strain being attributed to a recently diagnosed hernia, so I had been forced to drive to the campus. David had kindly volunteered to help with invigilation that day, but the main thing he witnessed – with some concern – was me hirpling around the exam hall. He accompanied me back to the School of Law after the exam, carrying more than his fair share of exam scripts on my behalf. Clearly something was wrong with me, and the next day I was admitted to Aberdeen Royal Infirmary after blood tests showed something of concern that was decidedly not a hernia. The next again day I was diagnosed with stage 4 testicular cancer: this went some way to explaining my breathlessness, and a few other things besides.

It goes without saying this was not a great time for me, but I was lucky enough to have many colleagues who sprung into action to help. Special mention must go to the property law team of Roddy Paisley, Andrew Simpson, Douglas Bain and Abbe Brown, but extra special mention goes to David. Not only did he immediately step up to replace me as class coordinator of that course for the impending term, he also furnished me with copious supplies of books, butteries and best wishes when he visited me in the hospital at the first possible opportunity. When I was well enough to participate in academic tasks, he was happy enough to let me do so, but when I was not I was able to rely on him to deliver a course in my absence.

Fast forward to February 2016 and I can offer two further recent anecdotes. When I last saw him in person, I asked him if he would be kind enough to look over my contribution to his festschrift. He agreed, of course, but I had not quite finished it to a standard that I felt David would have been proud of. Following his sudden death he will never get to see it. Whilst I am grateful he was there to hear my oral tribute to him at his conference last year, the regret that he was not able to see even a form of those words written down is something that will linger with me for some time.

As for my last communication with David, this began with an email attaching a short “case commentary” note. The case my draft article related to was a dispute about corporeal moveable property. On Friday, he sent me some helpful points for consideration. I replied to thank him, offered him some counter-analysis, and also noted that I was actually on annual leave that day (albeit I was replying to emails). David then sent me some further thoughts and source material, whilst simultaneously imploring that I did not reply to his correspondence on my day off. I followed his order. I am strangely gutted that I did, as I did not get to finish that last conversation with him, but I think even that abrupt ending, at his behest, tells something of the man: not only was he keen to help in that specific instance, he was also looking out for my best interests as a whole.

Other tributes to David will follow, from friends and family who knew him for longer than I did. Until then, I hope this short note goes some way to set out what a special person David was. He leaves behind a staggering body of scholarship, which will be documented in the forthcoming festschrift, but he also leaves many fond memories. Even so, I will miss him terribly.