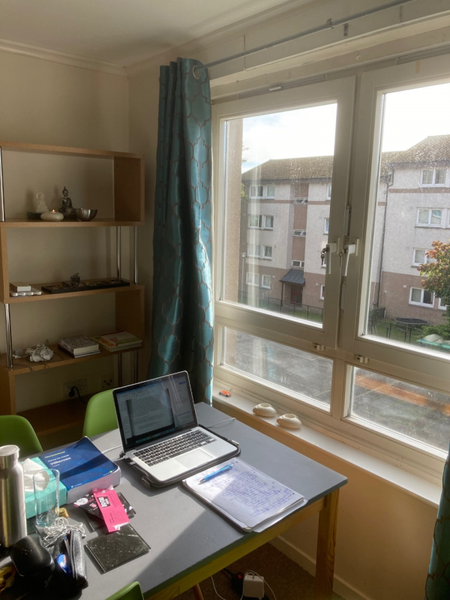 The University of Aberdeen is truly international, with students coming from every part of the world. However, due to the ongoing pandemic, the move to Scotland is now more complicated. A self-isolation period of 14 days was one of the requirements for international students when arriving on Scottish territory. As mentioned by the Government, it can take up to 14 days for you to develop coronavirus symptoms after you catch the virus and, in this time, you can pass it on to others.

While being in self-isolation may seem daunting, the University is very well organised. It has put in place a lot of support schemes for students: from mental health to grocery deliveries; they will help during your isolation period.

Two international students, Esther Kapern from Belgium, and Leon Muthunayake from Germany, had to self-isolate when landing in Aberdeen. Here they share their positive experiences:

After moving from Brussels to Aberdeen, I had to quarantine for 14 days. It was not as bad as I imagined, thanks to my flatmates who moved in a few days after me.

I decided to move in at the beginning of September so that I would have enough time to isolate without missing any classes. Even without arriving early, it would not have been a problem, because the University offered students both online and on campus delivery, so we could keep up with classes, so we did not miss out during isolation.

The biggest problem that we had during our isolation in our flat was getting groceries without going outside. None of us had a UK phone number, which is required in almost all grocery stores to order online. Fortunately, we found one store that would deliver our groceries without a British number (for all of you who will have the same problems in January, it was Sainsbury’s).

Even if my flatmate and I had some problems to adjust to the quarantine, it helped that we were not alone in a flat. During the isolation, we played games and cooked together. Nevertheless, we were very happy and relieved when the quarantine ended.

Unfortunately, we had to isolate again later because one of my flatmates did a Coronavirus test and was waiting for the results. The University was very caring after we filled out the form on self-isolation. We all received several calls from the mental health office and other people who tried to help us in our situation. We were even offered self-isolation kits with food, and the University tried to keep connected with us.

When we tried to tell the University that the test result was negative, it was a little complicated to communicate with all the competent people at the University. The calls and emails continued a while after we told the University that we would not have to isolate anymore. But it is better to get too many calls from people who care about you than not get enough help.

All in all, I would say that self-isolation is not something that you really have to worry about or fear. Of course, it is hard to stay inside for 14 days, especially when you live alone. But the University offers a lot of help and it is definitely possible to do the self-isolation if the reward at the end is to enjoy living in Aberdeen.

Arriving in Aberdeen this time was very different compared to my Erasmus exchange experience three years ago. The pandemic had turned everything upside down. It was quite a rough start in Aberdeen as I had to self-isolate. Even though I came from a country of exception (Germany) I had to quarantine due to my stopover in Amsterdam which I, unfortunately, found out just two days before arriving.

However, I was supported very much on arrival by my close friend and “Scottish father” Hanshi Marc Howes, the head coach of the Aberdeen University All-Round Fighting Club (AUARFC). As I am renting out his apartment, he helped me to get the basic groceries I’d need for two weeks. After settling in, I was happy to know that most supermarkets would do deliveries which made life at home much more convenient. Also, the fact that the University was offering online classes besides the ones on campus eased the whole situation for me.

I guess without all this support it would have been very tough as I was worried about my studies and also about the loneliness. But in fact, the quarantine period went by very smoothly, and I was able to enjoy the online courses as much as the online socialisation programmes. I’m so glad and thankful that I didn’t feel left behind. The University is doing a great job, and it’s unique compared to other places how much effort is put in to taking care of the newly arriving students.

A picture of Leon's desk during self-isolation: