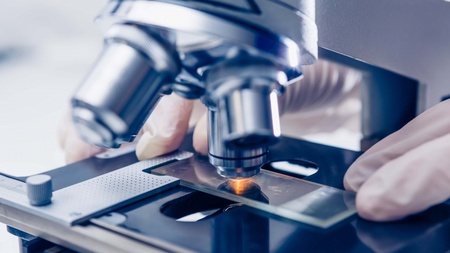 Researchers have made a huge leap forward in finding a targeted therapy for acute myeloid leukaemia.

...we unlock the potential to attach a toxin to it which can then be carried into the cell and ultimately destroy it." Dr Huan Cao

The innovative ‘magic bullet’ technique uses specific antibody-targeting technology that would reduce the need for current treatments that can be arduous, invasive and require long hospital admissions.

Acute myeloid leukaemia (AML) generally affects older people with around three thousand people diagnosed per year in the UK alone. Current treatments can involve the use of bone marrow transplantation which can be painful, arduous and can sometimes bring with it unpleasant side effects.

Published in the British Journal of Haematology, and funded by the Biotechnology and Biological Sciences Research Council (BBSRC), the study was led by Dr Huan Cao, Research Fellow at the University of Aberdeen, alongside colleagues at Cambridge University where much of the work was carried out.

Dr Cao explains: “We are looking to find a cure for leukaemia by using targeted antibody therapy known as ‘magic bullets.’ For this we needed to identify a cancer specific target and make an antibody against it.

“We found that in acute myeloid leukaemia, Siglec-15 is highly expressed compared to healthy cells and set out to find a way to use this over-expression to our advantage. By identifying a molecule that binds to Siglec-15, we unlock the potential to attach a toxin to it which can then be carried into the cell and ultimately destroy it.

“In this way then it is possible that anti-Siglec-15 might be used as a “magic bullet” to treat AML cells by introducing toxins into the diseased cells. “

Although magic bullets have been used in some types of cancer, this is the first time it has been explored in AML.

Dr Cao adds: “Acute myeloid leukaemia is a big killer especially for the elderly population.  The “magic bullet” treatment can be very effective with minimal side effects which means it could be hugely beneficial to an already vulnerable population.

“Although still in the experimental phase, if all goes well – there is potential that this may be used clinically as a treatment for patients within the next 3-5 years.”