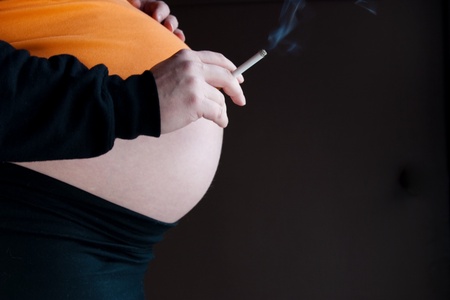 Smoking or being overweight during pregnancy causes 'worrying changes' to the development of the unborn baby's thyroids, and could predispose them to disease after birth, according to a new study from the University of Aberdeen.

The correct level of thyroid hormone is essential for normal growth and development of the baby in the womb and of the children after birth. This includes normal brain development.

Around 3% of pregnant women do not make enough thyroid hormone and this is linked with increased risk of problems like autism and hyperactivity in the children.

Researchers at the Universities of Aberdeen, Glasgow, Manitoba (Canada) and Institut de Sante Publique du Quebec (Canada) studied the thyroid glands and thyroid hormones of 93 normal human foetuses between 12 and 20 weeks of gestation.

The study, published today in BMC Medicine found that if the mother smoked, the baby’s thyroid hormones were altered regardless of the sex of the baby but in daughters the hormone signal from the brain also increases to produce this effect.

More surprisingly, they found that if the mother was overweight (a BMI over 25) female foetuses were affected far more than male foetuses. They found that the thyroid glands were heavier with changes in levels of key genes. They also found abnormal development, with more disorganised or poorly developed areas, in the female foetus thyroids.

Prof Paul Fowler of the University of Aberdeen said: “Thyroid hormones are so important for health and development that lifestyle risks to the baby in the womb, and after birth, need to be better understood.

“Thyroid diseases are the most common causes of hormone problems in women of reproductive age. Maternal lifestyle, such as cigarette smoking or being overweight, is also linked with reduced health of the offspring, including abnormal behaviour and metabolism.

“Both smoking while pregnant and being overweight or obese during pregnancy are linked with increased health risks in the offspring. Such risks include obesity and cognition problems in the children. This is why we wanted to understand what effects maternal smoking, or being overweight, were having on the baby’s thyroid systems.”

Dr Panagiotis Filis, a Medical Research Council funded post-doctoral scientist at the University of Aberdeen and first author of the project, added: “Our results show for the first time that if the mother smokes or is overweight, there are worrying changes in the development and function of her baby’s thyroid gland.

“The effects are different between these two lifestyle factors and also have sex-specific aspects. The finding of greater effects in female fetuses is interesting given that thyroid disease is around seven times more common in women than men.

“Overall this study shows that the mother’s lifestyle choices, cigarette smoking and being overweight, are affecting the development of her children’s thyroid systems, probably predisposing them to disease after birth.”