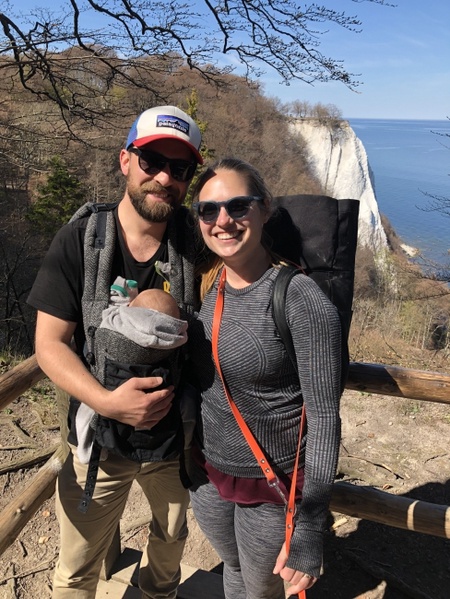 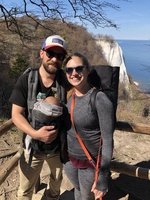 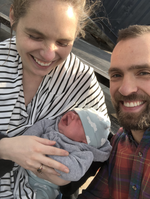 As part of our series of alumni profiles featuring graduates who have made the journey from Aberdeen to Europe, we catch up with Berlin-based couple Daniel Wolk and Katherine Claude about their university romance, the joy of their first child, and how their time in Aberdeen has helped shape their lives.

Daniel: I am from a town called Walsrode in Northern Germany. I decided to study at Aberdeen University because of its outstanding ranking. Economics became my subject because it’s a pre-requisite for most finance jobs in Germany.

Katherine and I met early in first year and I was instantly enamoured with her. I could not stop thinking about her so, one night, I printed out 10 pages of what could only be described as a desperate cry for her phone number and taped those over her entire building. From that point, we pretty much spent every day together and we moved in together in second year.

Katherine: I was born and raised in Boston, and I originally went to Southern Methodist University in Dallas, Texas, where I was minoring in English and majoring in biology with the goal of attending medical school. However, I realised fairly quickly that pre-med wasn’t for me so, wanting to try something new, I applied to Aberdeen.

Daniel and I met within the first few weeks of starting at Aberdeen, when we both stayed in Hillhead Halls.

Daniel: I graduated in 2008, which was a rough year for Economics graduates, but I had spent my summers working for a real estate investment company in Berlin and they offered me a job before I graduated. My degree in economics and my grasp of English allowed me to advance faster than most of my German peers.

Our daughter, Persephone Grace, or Poppy as we call her, was born in February and has added joy to my life in a way I could not have anticipated.

Katherine: After graduation, we moved to Berlin where I taught ESL classes and worked on EU projects for didactical development. However, I decided to return to some sort of training or further education and discovered Brewery Technology, which I have been studying at the Technical University for four years.

Currently, we are still trying to find our rhythm with baby Poppy, and I am now back at work after two months of paternity leave.

Katherine: My days are currently filled with breastfeeding, diapers and walks with Persephone and our lab, Howie. My plan is to complete my Bachelors degree as soon as I return from maternity leave.

Daniel: The obvious things I learned during my time at university were analytical and critical thinking, as well as an understanding of the economy, financial logic and plain old math. Another is having been thrust into an alien environment: you don’t really speak the language, the culture is different, and you have zero friends. You must adapt, and I have become more confident and mature.

Katherine:  My time in Aberdeen was formative and the immense personal development I experienced is what enabled me to make the bold choice of starting over again as an adult.  The relationships I made with people from around the globe are what I hold dear, and I am forever thankful for the time that I there. I had no idea how much it would influence the rest of my life, but it has been integral in what has happened to me since, especially in terms of my family life.